"Handsome By Chance: Why Humans Look Different From Neanderthals" 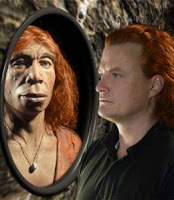 "Handsome By Chance:
Why Humans Look Different From Neanderthals"
"Chance, not natural selection, best explains why the modern human skull looks so different from that of its Neanderthal relative, according to a new study led by Tim Weaver, assistant professor of anthropology at UC Davis.
"For 150 years, scientists have tried to decipher why Neanderthal skulls are different from those of modern humans," Weaver said. "Most accounts have emphasized natural selection and the possible adaptive value of either Neanderthal or modern human traits. We show that instead, random changes over the past 500,000 years or so – since Neanderthals and modern humans became isolated from each other – are the best explanation for these differences."
Weaver and his colleagues compared cranial measurements of 2,524 modern human skulls and 20 Neanderthal specimens, then contrasted those results with genetic information from a separate sample of 1,056 modern humans. The scientists concluded that Neanderthals did not develop their protruding mid-faces as an adaptation to icy Pleistocene weather or the demands of using teeth as tools, and the retracted faces of modern humans are not an adaptation for language, as some anthropologists have proposed. Instead, random "genetic drift" is the likeliest reason for these skull differences. The study appears in the August issue of the "Journal of Human Evolution."

Source: University of California, Davis.
"Handsome By Chance: Why Humans Look Different From Neanderthals."
- http://www.sciencedaily.com/releases/2007/08/070813101018.htm
Posted by CoyotePrime at 7:18 PM