"Why Recovery Calls Are Doomed"
by Karl Denninger

"God the pumping is getting disgusting. I want to put forward something objective and impossible to argue with: MATH. Let's go back to this chart: 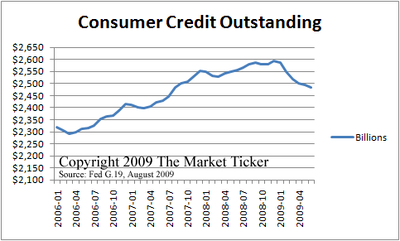 $2.5 trillion in consumer credit outstanding. Now let's focus on the underlying fundamental reality of consumer-generated GDP and economic activity in general, and the impact of what I call the rate spread on that activity. Back in 2007 before the mess got out of hand you could get a 5% 1 year CD. That's the savings rate, or what you were paid to save money.
In addition prime credit on revolving accounts was typically handed out (like candy) at 9.9% or less. I had credit cards with offered rates under 10% and so did a lot of other people. "Higher risk" but still "standard" rates were in the mid-teens (13-14%), with only penalty rates exceeding 20%. Nearly everyone could avoid a penalty rate by refinancing their house and paying off their credit card with the HELOC if required.

Ok. Now we have this "crisis" but due to the lack of will in Congress, regulators and The Fed they fail to force the bad assets out into the open where they are marked to the market and the people who have those bad assets go under. Doing so would result in a lot of bank bankruptcies. This is thought of as "bad", but in fact it is only bad for the banks that have lied - the good banks (and there are some) and credit unions would win huge from such an event, as they'd not only get your deposits but also your loan business.
Nonetheless most if not all of the "big banks" are the ones who have Congress in their pocket and they're on the bad list. So in response to this fees and interest rates have gone to the moon. I run no balance on my plastic and have a near-perfect FICO (being "dinged" only because I don't carry balances), charging and paying off every month, generating a very nice "discount" income for any card issuer that gives me credit. Nonetheless I have seen interest rates repriced "for market reasons" up to 13, 14 and in one case to 17.9%. In addition the interest rate available on a 1 year CD has gone down from 5% to 1%.
What this does to the "spread" and thus private consumer activity is tremendous. Revolving credit is instantly repriced on the outstanding balance at the new interest rate, as are the CDs when they roll over, typically after a year. For the "typical Grandmother" who was making 5% on her CD and paying 9.9% on her plastic, the spread was 4.9%. That is, 4.9% was the "real cost of credit" to her annualized. Reasonable.
Now the credit card is 18.9% and her CD earns 1%. The spread is now 17.9%, or nearly 18%, an increase of 12.8%. For the "subprime" borrower its awful as well. He has no savings, so the CD rate means nothing. But his credit card went from 20% to 36% due to missing one payment. He's seen a spread increase of sixteen percent.
Why does this matter? It matters tremendously! Remember, from the above there is $2.5 trillion outstanding in consumer credit. An increase of just ten percent in the spread cost for money means that $250 billion dollars each and every year does not get spent on consumption (and employment of those who make what was consumed), it instead goes to the banks to paper over their fraudulently marked paper! How big of a deal is this?
Our economy (at present) is around $13 trillion dollars (was closer to $14, but heh, 'tis a recession, right?) This is thus a real and permanent 1.92% decrease in private-activity GDP each and every year and it will NEVER GO AWAY so long as "The Bezzle" mandates that the spread be used to cover up the fraudulent accounting at the banks and other financial institutions! Nor does it stop with consumers. Corporations are also paying outrageous spreads over comparable Treasuries to borrow money compared to just a couple of years ago, and that interest once again is going to the banks and other institutions that buy their paper and use the excess spread to paper over THEIR losses on mismarked paper. As such the $250 billion number is almost certainly greatly understating the true amount of the damage.
Folks, if you think that this sort of game-playing is somehow "beneficial" to the economy or it is "no big deal" this ought to disabuse you of that notion RIGHT NOW. There is no possible way to generate a durable trend-growth economic recovery ever in the future until this game-playing stops. This is the fundamental reason that Japan never turned the corner and had a durable recovery and it is why we won't either.
It simply can't happen. The mathematics make it impossible, as that excess spread comes off GDP each and every year until the bad paper is either removed from the system or amortized and the excess spread disappears. Since most of this paper (especially that related to houses!) has amortization schedules measured in decades and an underwater homeowner cannot refinance, this drain on our economy is going to remain for years, not months.
There is only one way to stop it: FORCE all of the bad paper into the open immediately, close all the defunct institutions that this uncovers, and remove the excess liquidity so that the rate spread contracts back to a reasonable level. This means that I will once again be able to get a 5% CD and I will once again see "good credit risks" offered revolving credit at under 10%. While this would trash a bunch of banks (and it should) it would free upwards of $250 billion dollars a year in consumer spending!
Our regulators and government officials are both protecting crooked dealing and destroying our economic recovery prospects. Wake up America."
- Karl Denninger,
- http://market-ticker.denninger.net/archives/1362-Why-Recovery-Calls-Are-Doomed-The-Bezzle.html
Posted by CoyotePrime at 6:11 PM