"Bode's Galaxy is one of the brightest galaxies that can be seen from the Earth. It is high in the northern sky in the constellation Ursa Major, the Great Bear. At an apparent magnitude of 6.8 it is just at the limit of naked-eye visibility. The galaxy's angular size is about the same as that of the Full Moon. 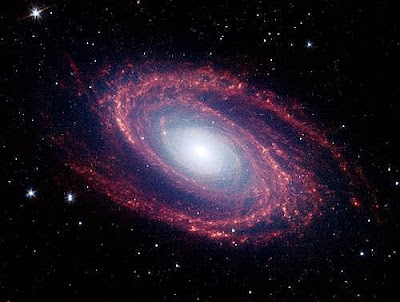 Only one supernova has been detected in Bode's or Messier 81.The supernova, named SN 1993J, was discovered in 1993 by F. Garcia in Spain. At the time, it was the second brightest supernova observed in the twentieth century. Though the galaxy is 11.6 million light-years away, the vision of the NASA/ESA Hubble Space Telescope is so sharp that it can resolve individual stars, along with open star clusters, globular star clusters, and even glowing regions of fluorescent gas.
The spiral arms, which wind all the way down into the nucleus, are made up of young, bluish, hot stars formed in the past few million years. They also host a population of stars formed in an episode of star formation that started about 600 million years ago. The galaxy’s central bulge -significantly larger than the Milky Way's- contains much older, redder stars. The central black hole is 70 million solar masses, or 15 times the mass of the Milky Way's black hole."
- http://www.innovations-report.com/html/reports/physics_astronomy/report-84944.html
Posted by CoyotePrime at 8:11 PM