"The Mask of Sanity: Psychopaths Rule Our World," Part 1 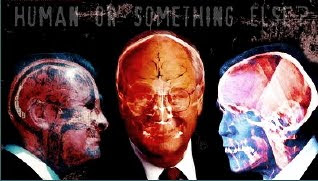 "The Mask of Sanity: Psychopaths Rule Our World"
Part 1
"Watching Europe's political class squirm after Ireland's “No” vote in the Lisbon Treaty referendum last year, I couldn't help but feel that some of them know something we don't: there is an agenda that must be met. The Irish people could not be threatened into sealing the nEU Deal, yet it's business as usual for the fanatical Eurocrats who are adamant nothing will get in their way. Incessant media hype is portending economic ruin lest Ireland vote 'correctly' at the second time of asking this fall.
It is evident, for those with eyes to see, that political discord between rival criminal cartels is purely for public consumption. Bread and circuses. Policy is not shaped by party politics. Decisions are made by a few: everyone else adjusts or starves. Weapons of financial mass destruction deployed by Central Bankers and Disaster-Capitalists, under the guise of protecting the markets and improving the efficiency of the system, vacuum the wealth of the nations - the work people produce - into ever fewer hands.
While we share a symbiotic reality, mutually bound by rules and conventions, theirs is very different. It shadows ours, feeding off the real economy below by manipulating the supply of money, which private banks control. 'Market crashes' are built into the system. Rules designed to regulate economies and prevent volatility are periodically altered. Hysteria is induced in people through repeated media suggestion forecasting impending doom. In the ensuing panic brought on by shock, windows of opportunity open for the few to recast the rules in their favour, extending and entrenching their vice on the real economy.
With all governments indebted to them and most ignorant of their existence, they foment chaos at will, incite or tranquillise populations as required, and maneuver legislation appropriate to their insatiable greed; small change here, incremental change there... until eventually the parameters are radically reset. In this diabolical, yet methodically scientific manner they progress towards neutralising all resistance to the digitised global 'human pen.'
Politicians know not to bite the hand that feeds, lest they disappear down the memory hole. Mere pawns - useful idiots to master strategists - they're hired and fired as perception managers and public relations officers, to give the illusion of freedom of choice. With a supporting cast of trained thugs with cattle prods and secret armies in the wings, the political puppet show offers a veneer of credibility and welcome distraction from inconvenient truths.
The how has a why.

Power is an addiction its abusers can neither comprehend nor arrest. They are programmed towards ruthless, hegemonic domination of the 'other'. A useful guide when treading the spider's web they weave: if you can name the institution or put a face to the name, then you're looking at a prop on the stage. The original instigators remain elusive. But unravelling the lies, the paper trail yields simple gems: the 'free market' really means freedom for the few to steal everything from the many. The game is rigged so that the people lose either way.

"We decide something, put it out there, then wait for some time to see if something happens. If there is no big shouting and no rebellions, because most do not understand at all what was decided, then we continue - step by step - until there is no more resistance," Jean-Claude Juncker, EU Council President in 2005, quoted in "Der Spiegel," 5/2/1999.
Breathtaking, is it not? And Machiavellian. And immoral. And impetuously childish. How can such callous disregard for others be expressed by those elected to represent the will of the people? Europe, of all places, surely no longer tolerates such anti-democratic mendacity! But what if it were possible to understand the bizarre behaviour of those who at once stupefy and betray us? Can the laws of nature shed any light on why persons we entrust with ever greater spheres of social control reach ever more depressing depths of hypocrisy and irresponsibility?
The world has only one problem - Psychopaths.

Ponerology is a branch of science drawing on psychology, biology and the social sciences. Born in the very setting which it studies, "Political Ponerology, A Science of Evil Adjusted for Political Purposes" was penned by a brilliant psychologist called Andrej Lobaczewski. Stealthily networking with colleagues in Poland and other Nazi and Soviet occupied countries during and after the Second World War, their research bore tremendously valuable fruit that both re-conceptualises and reinforces our understanding of the 'causal factors and processes of the genesis of moral and psycho-biological evil.'
The ponerogenesis of macrosocial phenomena - large scale evil - which constitutes the most important object of this book, appears to be subject to the same laws of nature that operate within human questions on an individual or small-group level. The role of persons with various psychological defects and anomalies of a clinically low level appears to be a perennial characteristic of such a phenomena.
"Political Ponerology" - p.31 n. division of theology dealing with evil; theological doctrine of wickedness or evil; from the Greek: poneros, meaning 'evil.'
These pioneers discovered a blind spot in our perception of the world, which only lent itself to study when historical circumstances transformed their countries from democracies to totalitarian systems, and the underlying pathological factors that produced Rule by Terror were unmasked.
Political Ponerology examines the nature of evil - a condition traditionally considered a theological matter - in light of modern medical knowledge of disease and psychopathy. It proceeds to map out the 'pathodynamics of psychopathology' - how the pathological influence of psychopaths infects conscience throughout society, transforming individuals' behaviour and rendering best intentions into their corrupted opposites. Presenting a panorama of the psychological reality, Ponerology's scientific acumen guides the reader through the previously uncharted dark underbelly of our world.
Lobaczewski & co found that a small but statistically constant 6% of the Polish population comprise various types of deviant personalities. A percentage of these were genetic psychopaths. Yes, you read that correctly. People are born without conscience. Though the least numerous of persons with psychological disorders, their role in 'ponerogenesis', the infection and spread of evil, is exceptionally great. These are true psychopaths; biological machines incapable of empathy.
"It seems that conscience and feelings are related to the abstract concepts of 'future' and 'others.' It is 'spatio-temporal.' We can feel fear, sympathy, empathy, sadness, and so on because we can IMAGINE, in an abstract way, the future based on our own experiences in the past. We can 'predict' how others will react because we are able to 'see ourselves' in them, even though they are 'out there'. In other words, we can not only identify with others spatially, so to speak - but also temporally - in time. The psychopath does not seem to have this capacity."

Continued in "The Mask of Sanity: Psychopaths Rule Our World,"Part 2
Posted by CoyotePrime at 6:36 PM