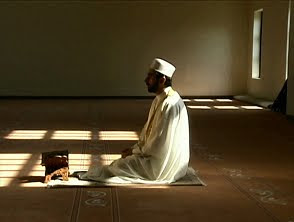 "Faith Rites Boost Brains, Even for Atheists"
"Buddhist monks and Catholic nuns boost their brain power through meditation and prayer, but even atheists can enjoy the mental benefits that believers derive from faith, according to a popular neuroscience author. The key, Andrew Newberg argues in his new book "How God Changes Your Brain," lies in the concentrating and calming effects that meditation or intense prayer have inside our heads.
Brain scanners show that intense meditation alters our gray matter, strengthening regions that focus the mind and foster compassion while calming those linked to fear and anger. Whether the meditator believes in the supernatural or is an atheist repeating a mantra, he says, the outcome can be the same - a growth in the compassion that virtually every religion teaches and a decline in negative feelings and emotions. "In essence, when you think about the really big questions in life - be they religious, scientific or psychological - your brain is going to grow," says Newberg, head of the Center for Spirituality and the Mind at the University of Pennsylvania.
"It doesn't matter if you're a Christian or a Jew, a Muslim or a Hindu, or an agnostic or an atheist," he writes in the book written with Mark Robert Waldman, a therapist at the Center. In his office at the University of Pennsylvania's hospital, Newberg told Reuters that "neurotheology" - the study of the brain's role in religious belief - is starting to shed light on what happens in believers' heads when they contemplate God.

Science and religion are often seen as opposites, to the point where some in each camp openly reject the other, but this medical doctor and professor of radiology, psychology and religious studies sees no reason not to study them together. "The two most powerful forces in all of human history have been religion and science," he said. "These are the two things that help us organize our world and understand it. Why not try to bring them together to address each other and ultimately our world in a more effective way?"
Atheists often see scanner images tracking blood flows in brains of meditating monks and nuns lost in prayer as proof that faith is an illusion. Newberg warns against simple conclusions: "If you see a brain scan of a nun who's perceiving God's presence in a room, all it tells you is what was happening in her brain when she perceived God's presence in a room. "It may be just the brain doing it, but it may be the brain being the receiver of spiritual phenomena," said Newberg, whose research shows the short prayers most believers say leave little trace on the brain because they are not as intense as meditation. "I'm not trying to say religion is bad or it's not real," he added. "I say people are religious and let's try to understand how it affects them." Another notion Newberg debunks is the idea there is a single "God spot" in the brain responsible for religious belief: "It's not like there's a little spiritual spot that lights up every time somebody thinks of God."
Instead, religious experiences fire neurons in several different parts of the brain, just like other events do. Locating them does not explain them, but gives pointers to how these phenomena occur and what they might mean. In their book, Newberg and Waldman sketch out some of the "God circuits" in the brain and their effects, especially if trained through meditation as muscles are through exercise.
Meditation both activates the frontal lobe, which "creates and integrates all of your ideas about God," and calms down the amygdala, the emotional region that can create images of an authoritative deity and fog our logical thinking. The parietal-frontal circuit gives us a sense of the space around us and our place in it. Meditation suppresses this sense, giving rise to a serene feeling of unity with God or the world. "Even 10 to 15 minutes of meditation appear to have significantly positive effects on cognition, relaxation and psychological health," the authors declare in the book. Newberg, who grew up in a Reform Jewish family and has studied many religions, said his work might help both believers and atheists understand religious feelings, which he said were "among the most powerful and complex experiences people have." But he cautioned against expecting "neurotheology" to come up with surprising insights soon: "As good as our techniques are, they are still incredibly crude. We have a long way to go."
- http://www.newsdaily.com/stories/tre57g3ln-us-brain-neurotheology/
Posted by CoyotePrime at 7:09 PM