Robert Jensen, “In Denial, On the Road to Extinction?” 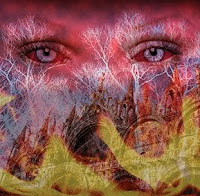 “In Denial, On the Road to Extinction?”
by Robert Jensen
"Put simply: We're in trouble, on all fronts, and the trouble is wider and deeper than most of us have been willing to acknowledge. We should struggle to build a road on which we can walk through those troubles - if such a road is possible - but I doubt it's going to look like any path we had previously envisioned, nor is it likely to lead anywhere close to where most of us thought we were going.
I have been talking about multiple crises without naming them in detail. As I have been speaking, I suspect you all have been cataloging them for yourself. For me, they are political (the absence of meaningful democracy in large-scale political units such as the modern nation-state), economic (the brutal inequalities that exist internal to all capitalist systems and between countries in a world dominated by that predatory capitalism), and ecological (the unsustainable nature of our systems and the lifestyles that arise from them). Beyond that, I am most disturbed by a cultural and spiritual crisis, a condition that goes to the core of how we understand what it means to be human.
Add all this up and it's pretty clear: We're in trouble. Based on my political activism and my general sense of the state of the world, I have come to the following conclusions about political and cultural change in my society:
• It's almost certain that no significant political change will happen in the coming year in the United States because the culture is not ready to face these questions. That suggests this is a time not to propose all-encompassing solutions but to sharpen our analysis in ongoing conversation about these crises. As activists we should continue to act, but there also is a time and place to analyze.
• It's probable that no mass movements will emerge in the next few years in the United States that will force leaders and institutions to face these questions. Many believe that until conditions in the First World get dramatically worse, most people will be stuck in the inertia created by privilege. That suggests that this is a time to expand our connections with like-minded people and create small-scale institutions and networks that can react quickly when political conditions change.
• It's plausible that the systems in place cannot be changed peacefully and that forces set in motion by patriarchy, white supremacy, nationalism and capitalism cannot be reversed without serious ruptures. That suggests that as we plan political strategies for the best-case scenarios, we not forget to prepare ourselves for something much worse.
• Finally, it's worth considering the possibility that our species - the human with the big brain - is an evolutionary dead end. I say that not to be depressing but, again, to be realistic. If that's the case, it doesn't mean we should give up. No matter how much time we humans have left on the planet, we can do what is possible to make that time meaningful.

Realistically, we need to get on a new road if we want there to be a future. The old future, the road we imagined we could travel, is gone - it is part of the delusion. Unless one accepts an irrational technological fundamentalism (the idea that we will always be able to find high-energy/advanced-technology fixes for problems), there are no easy solutions to these ecological and human problems. The solutions, if there are to be any, will come through a significant shift in how we live and a dramatic downscaling of the level at which we live. I say "if" because there is no guarantee that there are solutions. History does not owe us a chance to correct our mistakes just because we may want such a chance.
I think this argues for a joyful embrace of the truly awful place we find ourselves. That may seem counterintuitive, perhaps even a bit psychotic. Invoking joy in response to awful circumstances? For me, this is simply to recognize who I am and where I live. I am part of that species out of context, saddled with the mistakes of human history and no small number of my own tragic errors, but still alive in the world. I am aware of my limits but eager to test them. I try to retain an intellectual humility, the awareness that I may be wrong, while knowing I must act in the world even though I can't be certain. Whatever the case and whatever is possible, I want to be as fully alive as possible, which means struggling joyfully as part of movements that search for the road to a more just and sustainable world.
In this quest, I am often tired and afraid. To borrow a phrase from my friend Jim Koplin, I live daily with "a profound sense of grief." And yet every day that I can remember in recent years - in the period during which I have come to this analysis - I have experienced some kind of joy. Often that joy comes with the awareness that I live in a creation that I can never comprehend, that the complexity of the world dwarfs me. That does not lead me to fear my insignificance, but sends me off in an endlessly fascinating search for the significant.To put it in a bumper-sticker phrase for contemporary pop culture, "The world sucks/it's great to be alive."
- Robert Jensen, http://carolynbaker.net/site/content/view/1245/1/
Posted by CoyotePrime at 5:36 PM