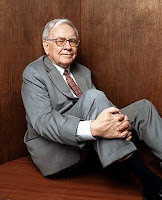 "The Greenback Effect"
by Warren Buffett
"In nature, every action has consequences, a phenomenon called the butterfly effect. These consequences, moreover, are not necessarily proportional. For example, doubling the carbon dioxide we belch into the atmosphere may far more than double the subsequent problems for society. Realizing this, the world properly worries about greenhouse emissions.
The butterfly effect reaches into the financial world as well. Here, the United States is spewing a potentially damaging substance into our economy — greenback emissions. To be sure, we’ve been doing this for a reason I resoundingly applaud. Last fall, our financial system stood on the brink of a collapse that threatened a depression. The crisis required our government to display wisdom, courage and decisiveness.

Fortunately, the Federal Reserve and key economic officials in both the Bush and Obama administrations responded more than ably to the need. They made mistakes, of course. How could it have been otherwise when supposedly indestructible pillars of our economic structure were tumbling all around them? A meltdown, though, was avoided, with a gusher of federal money playing an essential role in the rescue.
The United States economy is now out of the emergency room and appears to be on a slow path to recovery. But enormous dosages of monetary medicine continue to be administered and, before long, we will need to deal with their side effects. For now, most of those effects are invisible and could indeed remain latent for a long time. Still, their threat may be as ominous as that posed by the financial crisis itself.
To understand this threat, we need to look at where we stand historically. If we leave aside the war-impacted years of 1942 to 1946, the largest annual deficit the United States has incurred since 1920 was 6 percent of gross domestic product. This fiscal year, though, the deficit will rise to about 13 percent of G.D.P., more than twice the non-wartime record. In dollars, that equates to a staggering $1.8 trillion. Fiscally, we are in uncharted territory. Because of this gigantic deficit, our country’s “net debt” (that is, the amount held publicly) is mushrooming. During this fiscal year, it will increase more than one percentage point per month, climbing to about 56 percent of G.D.P. from 41 percent. Admittedly, other countries, like Japan and Italy, have far higher ratios and no one can know the precise level of net debt to G.D.P. at which the United States will lose its reputation for financial integrity. But a few more years like this one and we will find out.
An increase in federal debt can be financed in three ways: borrowing from foreigners, borrowing from our own citizens or, through a roundabout process, printing money. Let’s look at the prospects for each individually — and in combination. The current account deficit — dollars that we force-feed to the rest of the world and that must then be invested — will be $400 billion or so this year. Assume, in a relatively benign scenario, that all of this is directed by the recipients — China leads the list — to purchases of United States debt. Never mind that this all-Treasuries allocation is no sure thing: some countries may decide that purchasing American stocks, real estate or entire companies makes more sense than soaking up dollar-denominated bonds. Rumblings to that effect have recently increased.
Then take the second element of the scenario — borrowing from our own citizens. Assume that Americans save $500 billion, far above what they’ve saved recently but perhaps consistent with the changing national mood. Finally, assume that these citizens opt to put all their savings into United States Treasuries (partly through intermediaries like banks). Even with these heroic assumptions, the Treasury will be obliged to find another $900 billion to finance the remainder of the $1.8 trillion of debt it is issuing. Washington’s printing presses will need to work overtime. Slowing them down will require extraordinary political will. With government expenditures now running 185 percent of receipts, truly major changes in both taxes and outlays will be required. A revived economy can’t come close to bridging that sort of gap.
Legislators will correctly perceive that either raising taxes or cutting expenditures will threaten their re-election. To avoid this fate, they can opt for high rates of inflation, which never require a recorded vote and cannot be attributed to a specific action that any elected official takes. In fact, John Maynard Keynes long ago laid out a road map for political survival amid an economic disaster of just this sort: “By a continuing process of inflation, governments can confiscate, secretly and unobserved, an important part of the wealth of their citizens.... The process engages all the hidden forces of economic law on the side of destruction, and does it in a manner which not one man in a million is able to diagnose.” I want to emphasize that there is nothing evil or destructive in an increase in debt that is proportional to an increase in income or assets. As the resources of individuals, corporations and countries grow, each can handle more debt. The United States remains by far the most prosperous country on earth, and its debt-carrying capacity will grow in the future just as it has in the past.
But it was a wise man who said, “All I want to know is where I’m going to die so I’ll never go there.” We don’t want our country to evolve into the banana-republic economy described by Keynes. Our immediate problem is to get our country back on its feet and flourishing — “whatever it takes” still makes sense. Once recovery is gained, however, Congress must end the rise in the debt-to-G.D.P. ratio and keep our growth in obligations in line with our growth in resources. Unchecked carbon emissions will likely cause icebergs to melt. Unchecked greenback emissions will certainly cause the purchasing power of currency to melt. The dollar’s destiny lies with Congress."

A comment: This article, with all due respect, is the "Official Party Line" piece. It's here to see "their" side of the story. Anyone who can claim,"The crisis required our government to display wisdom, courage and decisiveness," and assert that this government was actually capable of any of those qualities is delusional, drugged, or intentionally lying... CoyotePrime
Posted by CoyotePrime at 8:22 AM