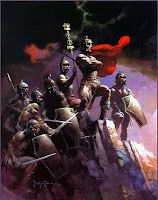 "The American Military, 2009: Endless Wars"
Articles by Chris Floyd and Tom Englehardt
"Yond Cassius has a lean and hungry look; he thinks too much:
such men are dangerous."
William Shakespeare, "Julius Caesar" Act I, Scene II
"Happy Junta Grounds"
by Chris Floyd
"These days, the always noxious air of the Beltway is astir with the machinations of the military junta that now dominates the gutted and looted ruins of the American republic. Two recent articles provide excellent guides to the brazen Pentagon squeeze play to ensure that the civilian government does not stray from the militarist agenda of more war, all the time, everywhere, always - a condition best captured in the marvelous title of the latest volume of Christopher Logue's serial reworking of The Illiad: All-Day Permanent Red.
Tom Englehardt focuses on the powerful proconsul who is directing the squeeze play from the shadows. Yes, we speak of General David Petraeus, an ambitious little beaver with an eye on the White House. Curiously, Petraeus seems to think that – unlike victorious generals-turned-presidents like Ulysses Grant and Dwight Eisenhower - he can win the Oval Office after directing not one but two failed wars. Even more curiously, he just might be right, especially given the slavishly kowtowing treatment he has always unaccountably received from the political establishment and the corporate media. Good PR, not battlefield prowess, is the only thing that counts these days, in our vastly altered state of permanent war." Complete article continues here:
-http://www.opednews.com/articles/Happy-Junta-Grounds-Milit-by-Chris-Floyd-090925-14.html
"How to Trap a President in a Losing War:
Petraeus, McChrystal, and the Surgettes"
By Tom Engelhardt
"Front and center in the debate over the Afghan War these days are General Stanley "Stan" McChrystal, Afghan war commander, whose "classified, pre-decisional" and devastating report - almost eight years and at least $220 billion later, the war is a complete disaster - was conveniently, not to say suspiciously, leaked to Bob Woodward of the Washington Post by we-know-not-who at a particularly embarrassing moment for Barack Obama; Admiral Michael "Mike" Mullen, chairman of the Joint Chiefs of Staff, who has been increasingly vocal about a "deteriorating" war and the need for more American boots on the ground; and the president himself, who blitzed every TV show in sight last Sunday and Monday for his health reform program, but spent significant time expressing doubts about sending more American troops to Afghanistan. ("I'm not interested in just being in Afghanistan for the sake of being in Afghanistan... or sending a message that America is here for the duration.")
Complete (long) article can be found here:
http://www.tomdispatch.com/post/175118/a_military_that_wants_its_way
Posted by CoyotePrime at 3:20 PM