"How to Sniff Out A Liar" 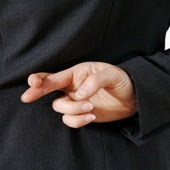 "How to Sniff Out A Liar"
by Melanie Lindner
"There are plenty of dangerously skilled liars- and not just the Bernie Madoffs and Jeffrey Skillings of the world. Indeed, under the right (or wrong) circumstances, we're all guilty fibbers. According to an oft-cited 1996 University of Virginia study led by psychologist Bella DePaulo, lying is part of the human condition. Over the course of one week, DePaulo and her colleagues asked 147 participants, aged 18 to 71, to record in a diary all of their social interactions and all of the lies they told during them. On average, each person lied just over 10 times, and only seven participants claimed to have been completely honest.
To be fair, most of the time we're just trying to be nice. (When your wife asks if you enjoyed the dinner she cooked, most husbands who know what's good for them say, "It was delicious.") Such "false positive" lies are delivered 10 to 20 times more often than spurious denials of culpability, according to DePaulo's research. Other studies show that men and women lie with equal frequency, though women are more likely to lie to make other people feel good, while men tend to lie to make themselves look better. As for who we hoodwink, "we lie less frequently to our significant others because we're more invested in those relationships," says Jeffrey Hancock, associate professor of communication at Cornell University. The question is: How to know when someone's selling you swampland in Florida?
Traditional polygraph tests, around in some form or fashion since the early 1900s, use sensors to detect fluctuations in blood pressure, pulse, respiration and sweat in response to probing questions. Two problems with polygraphs: First, they only work about 80% of the time, according to the American Polygraph Association. Second, it's not like we are going to carry all that hardware to a business meeting or a bar. And that means relying on our own very limited vigilance. "Although there are some ways in which liars behave differently from truth-tellers, there are no perfectly reliable cues to deception," admits DePaulo, author of more than a dozen deception studies. "Cues to deception differ according to factors such as the type of lie and the motivation for getting away with it." While there is no surefire on-the-spot way to sniff out dissemblers, there are some helpful tactics for uncovering untruths.
Liars often give short or one-word responses to questions, while truth tellers are more likely to flesh out their answers. According to a 2003 study by DePaulo, a liar provides fewer details and uses fewer words than an honest person, and talks for a smaller percentage of the conversation. Skilled liars don't break a sweat, but the rest of us get a little fidgety. Four possible giveaways: shifty eyes, higher vocal pitch, perspiration and heavier breathing. Of course, not everyone who doesn't meet your gaze is a liar.
"Certain behavioral traits, like averting eye contact, could be cultural and not indicative of a liar," says Joseph Buckley, president of John E. Reid & Associates, which has provided interview and interrogation training to more than 500,000 law enforcement agents to date. The company is also the creator of the Reid Technique, a nine-step interrogation process employed by many U.S. law enforcement agencies.
Liars are often reluctant to admit ordinary storytelling mistakes. When honest people tell stories, they may realize partway through that they left out some details and would unselfconsciously backtrack to fill in holes. They also may realize a previous statement wasn't quite right, and go back and explain further. Liars, on the other hand, "are worried that someone might catch them in a lie and are reluctant to admit to such ordinary imperfections," says DePaulo. Yet another clue: imprecise pronouns. To psychologically distance themselves from a lie, people often pepper their tales with second- and third-person pronouns like "you," "we" and "they," says Hancock. Liars are also more likely to ask that questions be repeated and begin responses with phrases like, "to tell you the truth," and "to be perfectly honest," says Reid.
When telling the truth, people often make hand gestures to the rhythm of their speech. Hands emphasize points or phrases- a natural and compelling technique when they actually believe the points they're making. The less certain will keep gesticulations in check, says Hancock.
The mode of communication matters too. Studies show that we are less likely to lie face-to-face than over the phone or the Web. In one week-long study of 30 college students, Hancock observed that the phone was the weapon of choice, enabling 37% of all the lies, versus 27% during face-to-face exchanges, 21% using Instant Messaging and just 14% via e-mail.
Will we ever come clean? Not likely. Guilty stomach knots aside, the subjects in DePaulo's study confessed that they would tell 75% of the lies again if given the opportunity. Chances are, they'd get away with it."
- http://www.forbes.com/2009/05/13/lie-detector-madoff-entrepreneurs-sales-marketing-liar.html

"Who are you going to believe? Me, or your own lying eyes?" - Groucho Marx
Posted by CoyotePrime at 11:10 AM