Jeff Nielson, “Why the US Economy CAN’T Recover” 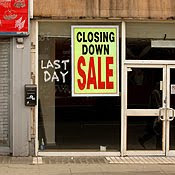 “Why the US Economy CAN’T Recover”
by Jeff Nielson
"The U.S. propaganda-machine now reports on a daily basis that a “U.S. economic recovery” is underway – despite not one piece of evidence to support this “bold assertion” (shameless lie?). Let's start with a definition of “recovery” suitable to the current, economic context: economic “recovery” means the economy is returning to (or “recovering”) a previous level of economic activity. In other words, with an economy which has shrunk by more than 10%, a “recovery” could only be occurring if the economy is already growing.

There is still absolutely no evidence that the U.S. economy is growing. Granted, the propagandists already know that the Treasury Department will report “economic growth” this quarter – regardless of what is actually happening in the real world. However, contrast this with the extremely cautious attitude of the same “experts” and “economists” when the U.S. economy started its collapse. Despite enormous volumes of evidence showing that the U.S. economy had started a serious collapse, these shameless shills refused to declare a “recession” had started for many months after that fact was obvious to the entire world.
When asked to justify their reluctance to apply the label of “recession” to this economic collapse (which is, in reality, a Greater Depression), the reply was the same: formally declaring a “recession” was something which was done in hindsight – after enough data had accumulated to justify that backward-looking prognosis. What a surprising coincidence that these same U.S. market-pumpers see absolutely no reason to exercise any caution at all when declaring a “recovery” has begun!
The most persuasive means of showing that the U.S. economy is not recovering is to show that it cannot recover. For this, I will offer thanks to Steve Keen (and his “Debtwatch”blog) for two, extremely effective metaphors (not to mention the analysis behind it). These effectively point out that the Obama regime has not only failed to acknowledge the real problem with the U.S. economy, but also chose the least-effective form of “stimulus” available. With respect to the latter point, Mr. Keen observes that there were several choices about which location in the “economic pipeline” Obama could choose to inject his stimulus. Under normal conditions (i.e. the “borrow-and-spend” paradigm, where “deficits don't matter”), stuffing money into the vaults of the banksters was the most-effective option – since these reckless gamblers have always lent-out at least $10 for every $1 they actually hold.
The problem is that this economic collapse was caused by providing the banksters with too much “easy money” and then allowing them to leverage that debt by an average of 30:1. Even the greedy banksters, themselves, know they have no choice but to de-leverage. Thus, when the Obama regime stuffed trillions into the vaults of the same banksters who caused all the problems – all the banksters did was “sit on” most of that money to reduce their leverage. Last I heard, the banksters had over $600 billion sitting in a “savings account” with the Federal Reserve – collecting 1% interest. Wow! That will sure “stimulate” the economy.
As Keen puts it, the Obama regime is using the wrong “pipe” in the economy. Because it was inevitable that the banksters would use any hand-outs to de-leverage, the “pipe” which pumps money from the banking system into the broader economy has effectively shrunk. This means no matter how much or how fast money is funneled to the banksters, the amount of “stimulus” which actually reaches the economy is now severely constrained. “Stimulus” dollars, says Keen, would have achieved a much greater effect by being provided to the debtors rather than the lenders, because those “pipes” in the economy had not “shrunk” by nearly as much (since neither U.S. businesses nor U.S. consumers were greedy and/or reckless enough to leverage themselves by 30:1). Put another way, it was always completely obvious that any and every “stimulus dollar” given to the banksters would help only the banksters.

However, as both Keen and myself continue to reiterate regularly, the main problem with measures to fix the U.S. economy is that only the symptoms are being treated – not the “disease”. Keen equates the humungous U.S. debt-load with a “malignant tumor” - a perfect metaphor. It is something which is rapidly growing in size, and guaranteed to kill the patient unless removed. Yet, instead of removing the tumor, the “cure” being pursued by the Obama regime is the equivalent of “tumor implants” - it is adding more tumors (i.e. more debt) to the (dying) patient, to try to improve the cosmetic appearance of the patient. Just as transplanting tumors into a patient whom is already dying from a malignant tumor is obviously harmful, rather than beneficial, massive debt-injections into an economy literally drowning in debt can only increase problems rather than reduce them.
In response to this, the Obama regime, the Federal Reserve, and the propaganda-machine are all reading off of the same script: at some point in the distant future, the U.S. will actually start repaying all this new debt – so it's not a problem. This is utter nonsense! The U.S. economy currently has a “structural deficit” in excess of $1 trillion per year – meaning that is the minimum amount of new debt the U.S. will incur with the economy operating at full capacity. This is about double the level of debt which officially constitutes a “debt crisis” - in an economy with real GDP of less than $11 trillion/year.

If the U.S. was actually serious about achieving a “balanced budget” the time to start is today, and not after trillions more in debt is piled on top of the existing $57 trillion in total public/private debt (not including $70 trillion, or so, in “unfunded liabilities”). The Obama regime, itself, claims it will add on another $9 trillion in debt – before it will (supposedly) achieve a balanced budget.

An economy which could not balance its budget during the peak of the recent bubble-based “economic boom” will supposedly be able to do so – after doubling the national debt. As if that proposition isn't ludicrous enough already, we have the historic pattern of the U.S. government only reporting half of the actual increase in the “national debt” when it reports its “official deficit” (see “Obama continues peddling fantasy-deficit numbers”). Thus, when Obama tells Americans he plans on heaping another $9 trillion of debt onto the shoulders of their children, what he really means is that another $18 trillion (or more) is on the way.

Forget about economics, this is all about arithmetic. Every additional dollar of debt heaped on top of the largest mountains of debt in the history of our species, permanently removes several pennies from the U.S. economy. It doesn't sound that bad – until you multiply that by a trillion. If an economy with a measly $11 trillion per year in GDP is permanently squandering over $2 trillion per year just paying interest on $57 trillion of debt, the best-case scenario is to simply “tread water” (i.e. just try to avoid any further shrinkage in the economy).

It is mathematically impossible for this debt-saturated economy to generate real economic growth through new debt. The propaganda-machine can churn out any fantasy-numbers it wants. In the real world, all we will see are more job-losses, more foreclosures, and more bankruptcies. Not much of a “recovery”.
- http://seekingalpha.com/instablog/407380-jeff-nielson/28710-why-the-u-s-economy-can-t-recover
Posted by CoyotePrime at 7:57 PM