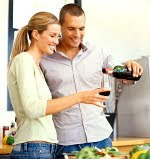 "Women 'Lack Confidence', Drink to Have Sex"
by Murray Wardrop
"Millions of British women drink alcohol before having sex - because they lack the confidence to do it sober, a study claims. Researchers examining the link between sexual habits and alcohol consumption among 3,000 women found that half preferred sex after a tipple. Women said alcohol helped them lose their inhibitions and become more adventurous between the sheets. The study found that 75 per cent of women like to drink a glass of wine or two immediately before getting into bed with their husband or boyfriend. Six per cent of women have never had sober sex, the survey revealed.
Kathryn Lakeland of Femfresh, the cosmetics brand which carried out the study, said a lack of confidence was the main concern of most women. She said: "These results are a clear indication that British women today are severely lacking in confidence. The fact that alcohol plays an integral role in their love lives shows that women are looking for a boost in self-esteem when it comes to their bedroom antics. While many women claim they only drink before sex because it is part of the dating process, a large percentage will actually refuse to get between the sheets without a bit of Dutch courage. This demonstrates that women feel unable to let their hair down and fully enjoy themselves without something to fuel their inhibitions. But in doing so many women will be losing self control and this is when drunken one night stands are more likely to occur."
The study also found that the average woman has slept with eight men, but was drunk with at least five of them. On two of these occasions women could not even remember the man's name the following morning, researchers discovered. One in six women admitted that they did not have the confidence to sleep with someone when they were sober. Fourteen per cent of women in a relationship said they couldn't face sleeping with their partner unless they had a couple of glasses of wine beforehand."
- http://www.sott.net/articles/show/193686-Women-drink-before-sex-
because-they-lack-the-confidence-to-do-it-sober-
Posted by CoyotePrime at 10:05 AM