"3 Signs of the Next Real Estate Collapse"

"3 Signs of the Next Real Estate Collapse"
By Katie Benner
"When the FDIC closed Chicago's Corus Bank last month, it may have signaled the beginning of the next shock to the banking system: commercial real estate defaults. Corus, whose balance sheet was larded with bad construction loans, is just one of many banks that have a slew of this debt on their books. Refinancing the $2 trillion in commercial mortgages will be tough, as property values decline. And in this new age of cautious lending, few banks are willing to refinance loans. "There is a lack of new debt," says Michael Haas, a real estate attorney at Jones Day. "There is a hesitancy to extend credit when there is a real possibility that the real estate may be worth less than it was a few years ago."
Now, in a situation eerily similar to the subprime crisis, the result is likely to be a wave of foreclosures and loan defaults that could, in turn, trigger a collapse in the market of the structured bonds backed by commercial real estate and construction debt. But when, and how bad will it be? Here are three indicators to watch:
1. Special Servicers: Firms such as LNR Property, CW Capital, and Centerline are tasked with unraveling the most troubled loans in a last ditch attempt to keep them from default. An uptick in business at these companies means more borrowers under duress. Between April and August of this year, the value of commercial loans in special servicing doubled to about $50 billion, according to Trepp, a firm that tracks the commercial real estate market.
2. Big Projects: When rents and property values fall, apartment complexes, malls, hotels, and major projects financed during the bubble become more likely to default on their debt. Fitch Ratings has identified several stressed loans that have been sliced and diced into billions of dollars in commercial mortgage-backed securities, including Tishman Speyer's $3 billion loan for its Stuyvesant Town-Peter Cooper apartment complex in Manhattan and a $4.1 billion loan secured by Extended Stay's hotels.
3. Regional Banks: Watch to see how banks such as Fidelity Southern and United Community Banks - identified in a SunTrust Robinson Humphrey report as having a high proportion of noncurrent construction loans - hold up over the next few months. Community banks were especially aggressive in originating commercial real estate loans, but they could still manage to avoid big problems. "Medium and small banks have a lot of exposure to local building projects," says Chris Whalen, a bank analyst and co-founder of Institutional Risk Analytics. "They're forbearing or getting involved in their customers' business rather than taking losses. They're hoping they can hold out until values come back."
- http://money.cnn.com/2009/10/21/real_estate/commercial_real_estate_bubble.fortune/index.htm
•
"The Eye of the Housing Storm"
by Chris Mayer
"This chart shows you it isn’t over yet: 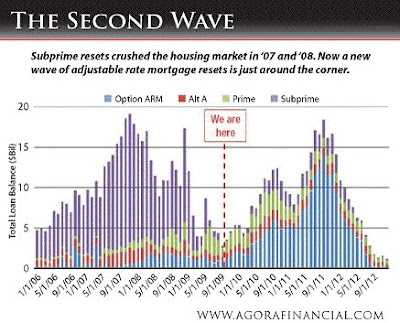 These helped frame where we are in the mortgage crisis, which has been the main shark in the water over the past couple of years. You should know where that shark is and whether or not it is hungry…
Clearly, it is not yet safe to get back in the water: Years 2010 and 2011 face big resets in so-called Alt-A and Option ARM loans. What this means is more write-downs and more losses for banks and others who hold these mortgages."
- http://dailyreckoning.com/
•
A "perfect storm" of collapsing commercial and residential real estate...
•
"Commercial Real Estate: The Problems Are Only Starting"
by twist

"The problem for the industry is that between now and 2013, more than $2 trillion in commercial mortgages, which typically have a five- to 10-year term, will need to be refinanced, according to a July report by Richard Parkus, head of commercial mortgage-backed securities at Deutsche Bank AG. It is not turmoil in the capital markets that is causing the bottleneck, but rather the fact that properties are not worth enough to retire the old debt in a refinancing, Parkus said. The value of commercial properties has fallen 40 percent from their peak in October 2007 through August, according the Moodys/REAL Commercial Property Price Index."
- http://housingdoom.com/
Posted by CoyotePrime at 4:10 AM