"A mysterious basin off the coast of India could be the largest, multi-ringed impact crater the world has ever seen. And if a new study is right, it may have been responsible for killing the dinosaurs off 65 million years ago.

Sankar Chatterjee of Texas Tech University and a team of researchers took a close look at the massive Shiva basin, a submerged depression west of India that is intensely mined for its oil and gas resources. Some complex craters are among the most productive hydrocarbon sites on the planet. Chatterjee will present his research at this month's Annual Meeting of the Geological Society of America in Portland, Oregon. 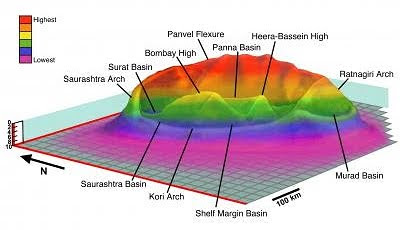 This diagram shows a three-dimensional reconstruction of the submerged Shiva crater (~500 km diameter) at the Mumbai Offshore Basin, western shelf of India from different cross-sectional and geophysical data. The overlying 4.3-mile-thick Cenozoic strata and water column were removed to show the morphology of the crater.
"If we are right, this is the largest crater known on our planet," Chatterjee said. "A bolide of this size, perhaps 40 kilometers (25 miles) in diameter creates its own tectonics." By contrast, the object that struck the Yucatan Peninsula, and is commonly thought to have killed the dinosaurs was between 8 and 10 kilometers (5 and 6.2 miles) wide.
It's hard to imagine such a cataclysm. But if the team is right, the Shiva impact vaporized Earth's crust at the point of collision, leaving nothing but ultra-hot mantle material to well up in its place. It is likely that the impact enhanced the nearby Deccan Traps volcanic eruptions that covered much of western India. What's more, the impact broke the Seychelles islands off of the Indian tectonic plate, and sent them drifting toward Africa.
The geological evidence is dramatic. Shiva's outer rim forms a rough, faulted ring some 500 kilometers in diameter, encircling the central peak, known as the Bombay High, which would be 3 miles tall from the ocean floor (about the height of Mount McKinley). Most of the crater lies submerged on India's continental shelf, but where it does come ashore it is marked by tall cliffs, active faults and hot springs. The impact appears to have sheared or destroyed much of the 30-mile-thick granite layer in the western coast of India.
The team hopes to go India later this year to examine rocks drill from the center of the putative crater for clues that would prove the strange basin was formed by a gigantic impact. "Rocks from the bottom of the crater will tell us the telltale sign of the impact event from shattered and melted target rocks. And we want to see if there are breccias, shocked quartz, and an iridium anomaly," Chatterjee said. Asteroids are rich in iridium, and such anomalies are thought of as the fingerprint of an impact."
Christa Stratton, cstratton@geosociety.org, Geological Society of America
- http://www.eurekalert.org/pub_releases/2009-10/gsoa-gin101509.php
Posted by CoyotePrime at 3:26 PM