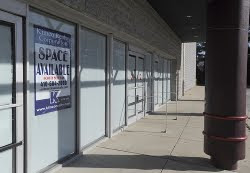 "Huge Commercial Real Estate Crash Coming"
by John Gittelsohn and Thomas R. Keene
"Billionaire investor Wilbur L. Ross Jr., said today the U.S. is in the beginning of a "huge crash in commercial real estate. All of the components of real estate value are going in the wrong direction simultaneously," said Ross, one of nine money managers participating in a government program to remove toxic assets from bank balance sheets. "Occupancy rates are going down. Rent rates are going down and the capitalization rate - the return that investors are demanding to buy a property - are going up."
U.S. commercial property sales are forecast to fall to the lowest in almost two decades as the industry endures its worst slump since the savings and loan crisis of the early 1990s, according to property research firm Real Capital Analytics Inc. The Moody's/REAL Commercial Property Price Indices already have fallen almost 41 percent since October 2007, Moody's Investors Service said Oct. 19.
Billionaire George Soros, speaking today at a lecture organized by the Central European University in Budapest, said a "bloodletting" may be coming for leveraged buyouts and commercial real estate. "The American consumer will no longer be able to serve as the motor for the world economy," said Soros, 79. His comments came in the same week that Capmark Financial Group Inc. filed for Chapter 11 bankruptcy protection after originating $60 billion in commercial property loans in 2006 and 2007.
Ross, the 71-year-old chairman and chief executive officer of WL Ross & Co. LLC, said in an interview on Bloomberg Radio that he would use "extreme caution" before putting money into commercial real estate, especially office space, because properties are losing tenants. U.S. office vacancies hit a five-year high of almost 17 percent in the third quarter, while shopping center vacancies climbed to their highest since 1992, according to the property research firm Reis Inc. "I think it's going to take quite a while to work itself out," Ross said.
As of Oct. 15, Ross said he had spent less than $100 million of at least $1.5 billion available to him under the Public-Private Investment Program, an investment pool of private and government money for purchasing distressed assets from financial institutions. Ross used the funds he spent so far to purchase residential mortgage-backed securities, he said in a Bloomberg Television interview.
WL Ross was among a group of firms that agreed Oct. 6 to buy $4.5 billion of Corus Bankshares Inc.'s real estate. Starwood Capital Group LLC and TPG led the group to buy the assets of the Chicago-based lender, which was seized by federal regulators Sept. 11 after its investments in construction loans for condominiums went bad.
In 2007, Ross ventured into the declining residential property market, winning an auction for the home-loan servicing unit of Melville, New York-based American Home Mortgage Investment Corp. He agreed to pay between $435 million and $500 million for the right to collect payments and maintain escrow on about $45.3 billion of home mortgages.
Dubbed the King of Bankruptcy by clients during his quarter century at the Rothschild investment bank, Ross entered the U.S. home mortgage business as an increasing number of borrowers quit making payments and profits sank in loan servicing. "Our methodology is to make a great big list: What's every thing we can think of that's either wrong with the industry or that we just plain don't like about it," Ross said today. "Then we start work on another list. If we had control of this industry, what would we do to fix each one of those problems?" he said. "Once we feel that there is a reasonable likelihood that the second chart kind of equals the first chart, that's when we get ready to do something."
- http://www.sott.net/articles/show/195888-Wilbur-Ross-Sees-Huge-Commercial-Real-Estate-Crash
Posted by CoyotePrime at 8:42 AM