"United Kingdom: What Are 'Spotter Cards?'"

"What Are 'Spotter Cards?'"
by "The Guardian" Staff
"This kind of highly confidential document - pictured below- is rarely seen by the public. These so-called "spotter cards" are issued by police to identify individuals they consider to be potential troublemakers because they have appeared at a number of demonstrations. 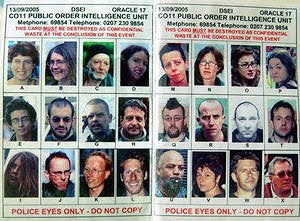 The photographs are drawn from police intelligence files. This card was apparently dropped at a demonstration against Britain's largest arms fair in 2005. H is Mark Thomas, the comedian and political activist. Asked why it was justifiable to put Thomas, who has no criminal record, on this card, the Metropolitan police replied: "We do not discuss intelligence we may hold in relation to individuals." Thomas had been acquitted of criminal damage after attaching himself to a bus containing arms traders at a previous fair.
The Met said: "This is an appropriate tactic used by police to help them identify people at specific events ... who may instigate offences or disorder." The arms fair "is a biannual event that is specifically targeted by known protest groups, who in the past have stated their intention was to shut down or disrupt the event." As the cards are "strictly controlled", the officers who lost it were "dealt with"."
- http://www.sott.net/articles/show/195588-Spotter-cards-What-they-look-like-and-how-they-work

Of course in this land of Free Law-Abiding Good Citizens
we don't have to worry about things like this, do we?
Posted by CoyotePrime at 2:04 PM