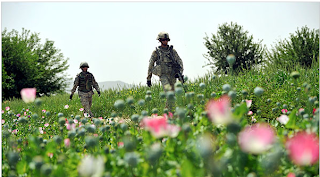 US Troops, ordered to protect Afghan poppy fields.
"Afghanistan has a monopoly on illegal opium production that has devastating global consequences, a UN report says. UN findings say an opium market worth $65bn (£39bn) funds global terrorism, caters to 15 million addicts, and kills 100,000 people every year. The UN says corruption, lawlessness and uncontrolled borders result in only 2% of Afghan opiates being seized locally. The UN says more Russians die annually from Afghan drugs than Soviet soldiers were killed during its Afghan conflict.
Afghanistan produces 92% of the world's opium, with the equivalent of 3,500 tonnes leaving the country each year. Most of the opium that leaves Afghanistan makes its way through Pakistan, Central Asia and Iran, leaving a trail of addiction, criminality and death in its wake, according to the report by the UN Office on Drugs and Crime (UNODC). It says more people die globally from Afghan opium than any other drug but just a tiny percentage of what is produced is seized on route.
Antonio Maria Costa, head of the UNODC, said Afghanistan's opium production could create a "perfect storm" in the region. "The Afghanistan/Pakistan border region has turned into the world's largest free-trade zone in anything and everything that is illicit - drugs of course, but also weapons, bomb-making equipment, chemical precursors, drug money, even people and migrants," he said. "We have identified the global consequences of the Afghan opium trade. Some are devastating but expected; others seem surprising, yet they are very real." He also had some difficult words for those nations currently involved in Afghanistan: "I urge the friends of Afghanistan to recognise that, to a large extent, these uncomfortable truths may be the result of benign neglect."
The report highlights a number of key factors as to why Afghanistan's illegal drugs trade has such an impact around the world. One significant reason is that "lawlessness, corruption and uncontrolled borders" are resulting in very limited seizures by the Afghan authorities. Just 2% of drugs are seized per annum, as compared with Colombia's 36% annually, the report says. Seizure rates are thought to decline as the drugs move closer to more lucrative key markets, with the value of the drugs doubling with every border crossed. For example, Iran intercepts about 20% of the opium entering its territory and Pakistan 17% - but Russia and some European countries are seizing less than 5%.

One gram of heroin worth $3 in Kabul is worth up to $100 on the streets of London, Milan or Moscow, it is estimated.
The UNODC is calling for more international resources to tackle the problem at source - in Afghanistan and surrounding areas - where law enforcement costs are cheaper. Another significant factor includes the vastly increased revenues made by the Taliban and other insurgent groups in taxing opium production in Afghanistan. An estimated $160m of drug money per year is now available to support terrorists activities, the report suggests.
"The Taliban's direct involvement in the opium trade allows them to fund a war machine that is becoming technologically more complex and increasingly widespread," said Antonia Maria Costa. "Some profiteers in the heroin trade wear suits and white collars, others wear black turbans."
In addition, the UN says one of its most surprising finds is that addiction is costing more lives in consumers than the numbers of foreign soldiers killed fighting in Afghanistan. For example, in Nato member states more than 10,000 people die from Afghan heroin each year - a figure five times higher than the total number of Nato troops killed in Afghanistan since 2001. In Russia, the country worst-affected by the drug, the annual 30,000 death toll is higher than the total Soviet death toll during the USSR's Afghanistan campaign of 1979-1989, the UN says. In addition, the UNODC says there is a pressing need to locate and destroy massive stockpiles of Afghan opium - an estimated 12,000 tons is being hoarded, it believes. With current supplies far outweighing demand, fears are high that Afghanistan's opium has the potential to spread terrorism and the drugs trade for many more years to come."
- http://www.sott.net/articles/show/196926-Afghan-opium-fuels-global-chaos-

As if the Wall Street banksters wouldn't sell their grandmothers into slavery for $65 billion...
Posted by CoyotePrime at 12:02 PM