"Court Rejects Appeal Over 'Redskins' Trademark"
By Bill Mears
"The Washington Redskins (3-6) are struggling this season, but the organization got a break Monday after the U.S. Supreme Court rejected an appeal from Native Americans calling the pro club's trademark "disparaging." At issue was whether plaintiffs were decades too late in filing a lawsuit, or whether that registered trademark should have been denied years ago since as plaintiffs claim " 'redskins' is today and has been historically a disparaging racial epithet that brings them into contempt, ridicule, and disrepute." 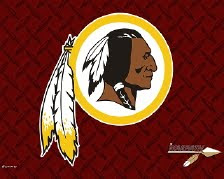 What could possibly be racist about this fine logo?*
The legal dispute is over what's called the doctrine of laches - negligence or delay in asserting a claim. The justices without comment refused to intervene in the dispute, effectively ending the suit. A lawsuit was first filed in 1992. Among the plaintiffs is Suzan Shown Harjo of Washington, a Cheyenne/Hodulgee Muscogee and a longtime advocate for Native American rights.
The Redskins name and logo was adopted in 1933 when the team was based in Boston, Massachusetts, and had been known as the Braves. In a legal brief filed with the court, the team said the name was changed to honor the Redskins coach at the time, William Henry "Lone Star" Dietz, a Native American.
The U.S. Patent and Trademark Office granted a formal trademark in 1967, and it has been renewed several times since. The team has said it has spent "millions of dollars ... promoting, advertising, and protecting its mark." A Patent Office appeals board in 1999 canceled the trademarks, but the Redskins successfully appealed in federal court. The question for the courts was interpretation of a federal law that allows cancellation of a registration "at any time" if the trademark comprises "matter which may disparage ... persons, living or dead ... or bring them into contempt, or disrepute."
A federal appeals court ultimately decided that the law's protections did not apply in this case and that the suit was filed too late. Native Americans have said the trademark should never have been granted in the first place. Efforts to to abolish sports nicknames also have been fought in college sports. The NCAA, the governing board for college sports, recommended in 2005 that 18 schools remove "hostile or abusive" nicknames or mascots.
A state judge last week temporarily blocked efforts by University of North Dakota officials to change the team's name, the Fighting Sioux. The College of William & Mary removed two feathers on its sports logo after the NCAA deemed it insulting to Native Americans. The school was allowed to keep its Tribe nickname after being known as the Indians for decades. Other college teams whose logos have been allowed to continue include the Florida State University Seminoles and Central Michigan University Chippewas. Professional sports teams with Native American names and imagery include the Cleveland Indians and Atlanta Braves baseball teams."
- http://www.cnn.com/2009/CRIME/11/16/scotus.redskins/index.html

"The more Indians we can kill this year the fewer we will need to kill the next, because the more I see of the Indians the more convinced I become that they must either all be killed or be maintained as a species of pauper. Their attempts at civilization is ridiculous..."
- Gen. William Tecumseh Sherman, 1867.
Ironic, isn't it, he with the middle name of a great Native American chief? And so it goes...
Posted by CoyotePrime at 2:12 PM