Nouriel Roubini: "Unemployment? The Worst Is Yet to Come" 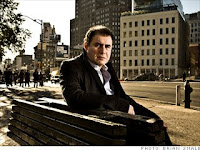 "Unemployment? The Worst Is Yet to Come"
by Nouriel Roubini
"Think the worst is over? Wrong. Conditions in the U.S. labor markets are awful and worsening. While the official unemployment rate is already 10.2% and another 200,000 jobs were lost in October, when you include discouraged workers and partially employed workers the figure is a whopping 17.5%.

So we can expect that job losses will continue until the end of 2010 at the earliest. In other words, if you are unemployed and looking for work and just waiting for the economy to turn the corner, you had better hunker down. All the economic numbers suggest this will take a while. The jobs just are not coming back.
There's really just one hope for our leaders to turn things around: a bold prescription that increases the fiscal stimulus with another round of labor-intensive, shovel-ready infrastructure projects, helps fiscally strapped state and local governments and provides a temporary tax credit to the private sector to hire more workers. Helping the unemployed just by extending unemployment benefits is necessary not sufficient; it leads to persistent unemployment rather than job creation.

The long-term picture for workers and families is even worse than current job loss numbers alone would suggest. Now as a way of sharing the pain, many firms are telling their workers to cut hours, take furloughs and accept lower wages. Specifically, that fall in hours worked is equivalent to another 3 million full time jobs lost on top of the 7.5 million jobs formally lost.

This is very bad news but we must face facts. Many of the lost jobs are gone forever, including construction jobs, finance jobs and manufacturing jobs. Recent studies suggest that a quarter of U.S. jobs are fully out-sourceable over time to other countries.
Other measures tell the same ugly story: The average length of unemployment is at an all time high; the ratio of job applicants to vacancies is 6 to 1; initial claims are down but continued claims are very high and now millions of unemployed are resorting to the exceptional extended unemployment benefits programs and are staying in them longer.

Based on my best judgment, it is most likely that the unemployment rate will peak close to 11% and will remain at a very high level for two years or more.
The weakness in labor markets and the sharp fall in labor income ensure a weak recovery of private consumption and an anemic recovery of the economy, and increases the risk of a double dip recession.
As a result of these terribly weak labor markets, we can expect weak recovery of consumption and economic growth; larger budget deficits; greater delinquencies in residential and commercial real estate and greater fall in home and commercial real estate prices; greater losses for banks and financial institutions on residential and commercial real estate mortgages, and in credit cards, auto loans and student loans and thus a greater rate of failures of banks; and greater protectionist pressures. The damage will be extensive and severe unless bold policy action is undertaken now."
-http://www.rgemonitor.com/roubini-monitor/257978/the_worst_is_yet_to_come_
unemployed_americans_should_hunker_down_for_more_job_losses?
Free PDF Book: "How to Repair a Failed System: An Independent View"
From NYU Stern School of Business
http://media.rgemonitor.com/papers/0/NyuFinArch.pdf
Posted by CoyotePrime at 3:33 PM