"You're as Old as You Eat... A Guide to Foods that Fight Off Age" 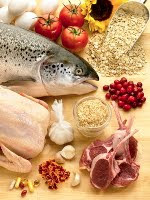