Archaeology: "What Are the 'Coso Petroglyphs'?"

"What Are the 'Coso Petroglyphs'?"

by the "NY Times" 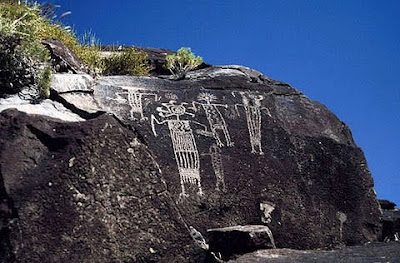 "Some of the rock paintings at China Lake Naval Air Weapons Center near Death Valley have been dated as far back as 16,000 years ago. Established in the summer of 1943 in the heat of Allied offensives in the Pacific, China Lake is the US Navy's premier weapons testing range and its largest real estate holding. "Every weapon being used overseas right now was tested here," said Peggy Shoaf, a civilian Navy public affairs officer. The property comprises 1.1 million acres of Mojave Desert north of Los Angeles and west of Death Valley.

The base is home to a complex of remote canyons holding the greatest concentration of ancient rock art in the Western Hemisphere, known as the Coso Petroglyphs. David S. Whitley, an archaeologist and expert on prehistoric rock art and iconographic interpretation believes the Coso Petroglyphs to be one of the most important rock art sites on earth. Mr. Whitley estimated that there may be as many as 100,000 images carved into the dark volcanic canyons above the China Lake basin, some as old as 12,000 to 16,000 years, others as recent as the mid-20th century.


Everywhere you look, for a mile or so down what is known as Little Petroglyph Canyon, there are images pecked or scratched into the rock faces: stylized human figures in a variety of headgear, stick figures with bows and arrows, dogs or coyotes, bear paws with extra digits, all manner of abstract geometric patterns, zigzags and circles and dots, and hundreds upon hundreds of what looked like bighorn sheep, some small, some larger than life size.


Some archaeologists believe that the images are evidence of simple hunting rituals. Mr. Whitley sees in them nothing less than the origins of human creativity and religion. He theorizes, based on his research, that the petroglyphs are the work of generations of shamans, or medicine men, who traveled here (from all over what is now the southwestern United States) to fast and smoke native tobacco, to hallucinate or have visions, and to render their hallucinations on the rock. Perhaps the goal was to make rain. Perhaps it was to impress upon their followers a sense of the supernatural.

For a time, after 9/11, civilian visits to the petroglyphs were suspended. "There's always a risk when you let civilians into a secured area," Ms. Shoaf said. But she said she felt the place was too precious for the public not to have access. So she rewrote the protocol to show the commanding officer how it might be possible to allow tours and still protect the base's security. He agreed. More than 1,100 civilians visit the site every year, either on tours available to the public or as part of private tours with command-approved escorts arranged through Ms. Shoaf's office.


Public petroglyph tours are available through the Maturango Museum (100 East Las Flores Avenue, Ridgecrest, California; 760-375-6900, maturango.org) $35 per person for nonmembers; $25 for members of museum and the Friends of Last Chance Canyon. Arrangements can be made through the Naval Air Weapons Station China Lake itself by calling the public affairs office at (760) 939-1683. The base's Web site has information about the petroglyphs and the tours, which carry a number of restrictions, at navair.navy.mil/nawcwd/nawcwd/recreation/petroglyphs.htm. Tours are held on weekends and holidays. Visitors are responsible for finding two command-approved escorts, arranging car pools and for filing all necessary paperwork. Up to three groups of 20 are allowed in the canyon each weekend day. No children under 10, and no pets. Only American citizens are now allowed to go on tours, and proof of citizenship is required for participants 16 and older."

Posted by CoyotePrime at 3:28 PM