Chet Raymo, "The Sea Around Us" 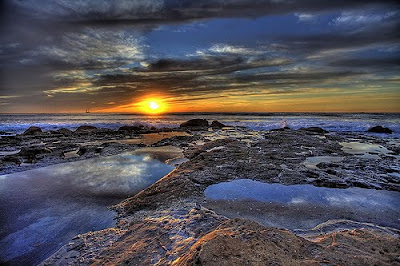 "The Sea Around Us"
by Chet Raymo

"A tidy, quiet shore this, this carbonate island in the tropics. The island itself is a fragile thing, the substance of it so soft one can nearly break it apart with one's hand. Every now and then the crumbling rocks at the back of the beach will reveal a bottle from the last century or so, a sure sign of how quickly the sand consolidates into soft stone, then crumbles again. Our tide pools are sparsely populated, I suppose, compared to the granite shores of the North Atlantic, but the reefs - ah, the reefs, glorious things those, full of colorful creatures that would have no use for their bright raiment in the dark waters of the north.

I'm reading Linda Lear's biography of Rachel Carson. She begins with Carson's testimony before a Senate committee on environmental pollution sparked by the publication of her bombshell of a book in 1962, “Silent Spring," an event that as much as anything marked the awakening of environmental consciousness around the world. As she testified, Carson was dying of cancer. Lear writes: "Carson could not be silent. She had peered into the fairy caves and tide pools of her beloved Maine coast and had seen the fragility and tenacity with which even the smallest creatures struggled for life against the relentless ocean tides. Her flashlight had captured the unforgettable spectacle of the solitary crab on the rocky beach at midnight, vulnerable yet unassailably resilient. She could not stand idly by and say nothing when all that was in jeopardy, when human existence itself was endangered."

I'm old enough to remember the aerial spraying of DDT in New England, that gentle rain of poison from the sky. When I visited my girlfriend in Florida, now my wife, trucks went up and down the streets bestowing poison on one and all, mosquitos and human babies alike. The chemical industry, of course, wasn't happy with Carson's book, any more than great segments of industry today are happy about those who warn of global warming. Just how all that works out remains to be seen, but we can thank Rachel Carson for teaching us how to have the conversation. Which prompts me to make sure to take a walk down the beach this morning, to the place where tide pools skitter and weave in their fragile vestments of living matter.”

Posted by CoyotePrime at 7:54 PM