"Financial Botox at Bank of America?"

"Financial Botox at Bank of America?"
by Joseph Tiberman 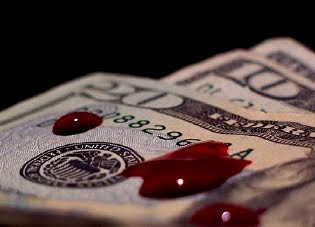 "TARP has grown increasingly unpopular. The legislation was furiously passed as the government clumsily groped to stem the financial crisis that was propelled by the Lehman bankruptcy. In short, they threw money at the problem by enacting a bill that was also loaded with pork – an incredibly cynical and all too predictable feature of legislation that could suffer no delay. TARP at best elicited a mixed reaction from the American public, many of whom viewed it as a bailout for the greedy on Wall Street. Indeed the numerous large financial institutions whose broken risk management made a crisis of some meaningful proportion inevitable deserved to fail. And there are those who believe that is exactly what should have happened. Many more, however, believe that the government action to salvage the financial system was necessary to avoid even worse financial market and economic fallout than occurred. Tarp is perhaps most despised by the bankers who received the program’s funds, as it entitles the government to input on compensation and other matters in which they most definitely prefer a free hand.
As the public hears of record bonuses (at least for some) on Wall Street, is it any wonder that resentment over TARP has grown? Politicians naturally respond to public sentiment. And in the last day Bank of America has made clear that it will repay these funds shortly. However, is this actually wise? Is Bank of America sure-footed? Has it’s financial solidity stabilized? In short, is the repayment of the $45 billion BofA owes the government timely.

In the second quarter the major banks all reported bottom line profits. Bank of America reported a profit of $3.2 billion, and the lower figure of $2.4 billion after preferred dividend payments, primarily to the U.S. government on the funds the government injected. Indeed the TARP funding did not come cheaply. What is particularly notable about those second quarter profits is that Bank of America only managed a bottom line in the black after a $9.1 billion of one time gains on sales of assets. Absent the gains, Bank of America would have registered a massive loss. (Citigroup managed a similar profit, but only after a one-time gain on sale of Smith Barney to Morgan Stanley for $11.1 billion — clearly a desperation move, akin to Lehman’s truncated attempt to sell Neuberger as it sought to stave off bankruptcy.) For the third quarter, ended September 30, BofA registered a loss of $1 billion, half the pretax figure. The loss would have been greater were it not for $3.4 billion in trading gains, a volatile source of income. (In the year earlier period the bank posted a trading loss of some $340 million.)

When we delve into the figures that drove these numbers what stands out most is the quality, or lack thereof, of the banks loans and securities portfolios. To begin with, between the second and third quarter ends total loans fell from $942 billion to $914 billion — lending credence to the frequent public complaint that banks are not lending. Of particular concern is the trend in non-performing loans. These rose between the two quarter ends from $29.2 billion to $31.9 billion. This is all the more alarming as net charge-offs from the loan loss reserve increased from $8.7 billion to $9.6 billion and provisions for future losses fell from $13.4 billion to $11.7 billion. Indeed, the drop in loan loss provisions appears counterintuitive. At the end of the third quarter, the allowance for loan losses — the money earmarked to cover non-performing loans — stood at a fairly modest 112% of the latter. At first blush, this might appear sound, as the reserves for losses are larger than designated problem loans. However, there is as yet no indication that the flow of new impaired loans is slowing, so that substantial additional provisions may well be required to cover future loan losses. Additionally, there is reason to question whether many banks with substantial problem loans are conservatively classifying them as such or choosing a methodology that masks the true extent of impairment. This would not be the first time such smoke and mirrors has hidden the true condition of some of our largest banks..

While Bank of America buttressed it’s second quarter profits with one time gains on equities, the bank holds a substantial amount of securities that are under water, but classified as temporarily impaired. In other words, the unrealized losses are not reflected in the financial statements. At the end of the third quarter this figure stood at $7.8 billion, down from $12.2 billion at the end of the previous quarter. There is at least some comfort that this unrealized loss, though large, has reduced.

What are we to conclude? Is Bank of America ready to exit intensive care? During the second quarter it racked up a massive operating loss, ameliorated by the one-time sale of assets. In the third quarter, large loan losses, as the bank shrinks its loan portfolio, continued to generate red ink and the bank registered an outright net loss. While fears that Dubai will be a second Lehman Brothers have moderated, the current environment is not yet stable. It is positive that BofA will raise common equity to fund part of the repayment of high coupon TARP funding. Still, would Bank of America, free of public and political pressure, unconcerned about government meddling, and more successfully attracting a new CEO choose this moment to repay the $45 billion? Is this prudent or merely expedient?"
- Joseph Tiberman, Author: “The Murder of Lehman, An Insider’s Look at the Global Meltdown”
Article Source:http://www.articlesbase.com/finance-articles/is-bank-of-america-healthy-or-are-
we-seeing-little-more-than-financial-botox-1594468.html
http://sweet-bun.info/?p=2486

ALL of the "Too-Big-To-Fail" banks are in similar circumstances; when the 2nd wave of defaulted adjustable rate mortgages hits fully they will all fail. See the article below titled "The Second Wave is Already Ashore."
Big hat tip to Keith Martin for providing this article.
Posted by CoyotePrime at 12:45 PM