"Centaurus A (NGC 5128) is the nearest giant, elliptical galaxy to the Milky Way, at a distance of about 11 million light-years. This beautiful and spectacular appearance is due to an opaque dust lane that covers the central part of the galaxy. This dust is thought to be the remains of a cosmic merger between a giant elliptical galaxy and a smaller spiral galaxy full of dust that was swallowed up 200 to 700 years ago. The central region of the image reveals the parallelogram-shaped ghostly remains of the smaller galaxy, the contents of which appear to be churning inside Centaurus A's core, likely triggering new generations of stars. 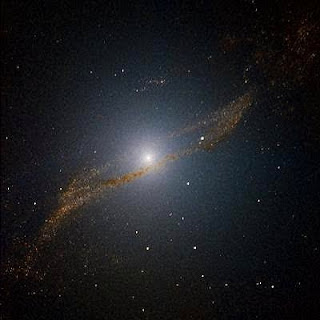 First glimpses of the "leftovers" of this event were obtained thanks to observations with the ESA Infrared Space Observatory , which revealed a 16 500 light-year-wide structure, very similar to that of a small barred galaxy. More recently, NASA's Spitzer Space Telescope resolved this structure into the parallelogram, which can be explained as the remnant of a gas-rich spiral galaxy falling into an elliptical galaxy and becoming twisted and warped in the process. Galaxy merging is the most common mechanism to explain the formation of such giant elliptical galaxies."
- http://www.dailygalaxy.com/my_weblog/2009/11/image-of-the-day-the-geometry-galaxy.html
Posted by CoyotePrime at 7:37 PM