"On January 5th the durables report for November was 'released'. It showed a 0.2% increase. I didn't write on it at the time, as it didn't appear to be particularly consequential. The report, of course, came in the middle of the first-week January market rally. But now, in the dark of night, the number has been revised - to a decrease of 0.7%. The reason is a claimed "statistical error." This, by the way, should have been obvious from the retail sales report, which I did write on.

Here's the ugly - the Census' link to the report is now listed as missing (that is, intentionally removed!) and what's worse the link they refer you to, the "Historical M3 Releases" does not have the corrected November data - it only has releases through October on it. That is, November's report has disappeared. No, the "historical" tab doesn't have it either. Attempting to retrieve it off the link in Google's search returns a "not currently available, see historical" message - but it's not there. 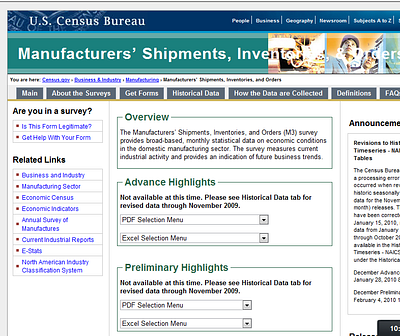 You would think that such an "error" would result in an immediate press release by Census identifying the cause of the error and a corrected report, along with CNBS and the rest of "ToutTV" talking about how this "mistake" happened and alerting investors to the fact that they had made decisions based on "mistaken" information and in fact durables had suffered a second sequential decline. YOU WOULD BE WRONG.
Are we now down to rank fraud in "data releases" from our government, revised in the dark of night without public notice or press release, with the agencies claiming "statistical error"? Folks, honest errors are immediately admitted to when discovered and disseminated to all of the people who the government or agency knows relies on these figures for economic decisions. But when "errors" are less than honest the person or agency committing them attempts to hide the evidence instead of admitting to and publicly exposing their mistake. You decide."
- http://market-ticker.denninger.net/

The lies, deceptions and trickery just never stop coming from our "public servants", do they, folks?
Posted by CoyotePrime at 10:41 AM