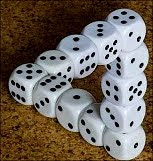 "Economic Depression: A Better Definition"
by Bill Bonner
“How can you keep talking about a depression,” asks a Dear Reader, “when the economy is clearly recovering just as it should be.” Ah ha! We’ll explain in a minute. First, the latest from Wall Street: The Dow fell 18 points yesterday. We’re still not sure whether the final, fading phase of the bear market has begun or not. This bounce took the Dow back to 10,725 on January 19th. It hasn’t seen that level since. Was that it? Was that as high as it’s going to get? Is it down from here on out…until the Dow finally bottoms out somewhere south of 5,000? We don’t know. We’ll just have to wait to find out… along with everyone else. Now, back to that ‘recovery’…

It’s true that there are some signs of “stabilization.” The unemployment rate is not getting badder as fast as it was a few months ago. And house prices seem to have stopped falling – for the moment. It’s also true that the economy managed to register positive ‘growth’ in the last quarter… mostly thanks to government spending and inventory restocking. The trouble is, all of these things are consistent with a depression – especially a depression that the feds are fighting every inch of the way. In the 1930s, there were several years of growth… and there were great years for the stock market too. Then, things fell apart again. The nation ended the ’30s not one penny richer than it had been when it began them. And Japan has seen some good years and some bad years, too, since its depression began in 1990. Oddly, Japan’s population is falling… so in per capita terms, Japan’s downturn hasn’t really been so bad. Per person, the Japanese got richer over the last 10 years.

GDP growth alone is a fraud. The gross number just doesn’t tell you anything worth knowing. It doesn’t really matter how fast an economy is growing. What counts is how fast it is growing per person… and whether that ‘growth’ is real or phony. Growth is not the same as prosperity…

Someday, we promise you, modern economists will be ranked below doctors who bled their patients to death and jungle tribes who threw maidens into volcanoes. They are quacks. These imposter economists think they can fix a recession and prevent a depression. When the private sector stops spending they urge the public sector to step in and replace the missing private spending. That, in a nutshell, is Keynes’ theory.

A nutshell is the appropriate container. Because there’s a world of difference between private spending and government spending. Private spending is voluntary; people choose to spend their money on things they really want. When the government spends, on the other hand, it is merely squandering stolen property. It may look like private spending. But it’s not at all the same thing. You can hand out checks to people; it’s not the same as when people earn money. You can build bridges and airports too… but they are only valuable to the extent that they are used efficiently. And you can hire all the government employees you want; they don’t necessarily add to the sum of human happiness or wealth (most likely they subtract from it!). Just look at societies that put everyone to work. There was no unemployment in Cambodia under the Khmer Rouge! Or in the Soviet Union. North Korea is another good example today. They all show that putting people to work for the government doesn’t make them rich…it makes them poor.

Yet, these modern economists – Martin Wolf at The Financial Times, Paul Krugman at The New York Times, Bernanke, Summers and Geithner in Washington – believe that they can control and cure a depression. All they have to do is to keep the GDP expanding… and keep unemployment from rising. How? Just spend money! The GDP calculators can’t tell a phony expense from a real one. Whether the government spends money to do something that is not worth doing… or hire someone who is not worth hiring… or just gives away money to someone who is not worth giving money to… the GDP quants don’t know the difference. They think one dollar spent is as good as any other… even if it is a dollar that didn’t exist! (Don’t get us started on that one…) And who knows if a job is worth doing? Only the person who pays for it. That’s the trouble with government employment; the people who pay the bills don’t make the hiring decisions.

Modern economists don’t even bother to think about it. All they care about is the unemployment rate…not about whether the job is actually useful or efficient. Want to boost the job rate? Easy. Just hire people. Does this make people better off? Of course not.

The Financial Times had a full page in its Wednesday edition devoted to China’s empty towns. Bloomberg has been on the story too. It is the story of what actually happens when government meddles in an economy. Last year, China ordered its banks to lend money to infrastructure programs in order to offset the worldwide financial meltdown. The banks responded, doubling their lending. Observers in the West were stunned… and envious. If only we could ‘get things done’ like that, they lamented. If only our governments had more authority and control over the economy! But let us go back a year and put ourselves in the shoes of the bankers. They must have had loan requests. Some of them they must have judged worthy of funding, others not. But how was it possible that the number of project deemed creditworthy doubled in the space of a few months?

Well, it didn’t happen. Instead, the Chinese government merely changed the rules of the game. The banks, under pressure to loan out money, reacted by lending it out… to marginal projects. Now, we’re beginning to read about them in the paper – mostly towns without any people. Just wait until China blows up. Then, we’ll read about banks without money. Stores without customers. And businesses without a prayer. China is either going to blow up… or slow down."
- http://dailyreckoning.com/economic-depression-a-better-definition/
Posted by CoyotePrime at 11:42 AM