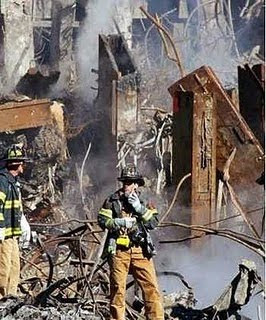 "9/11 Special Report: Thermite Fingerprint"
by Visibility911.com
"Dr. Steven Jones and Kevin Ryan are among several authors of a new paper that has appeared in the prestigious scientific journal "The Open Chemical Physics Journal" and is titled "Active Thermitic Material Discovered in Dust from the 9/11 World Trade Center Catastrophe."

In the graphic, right, note the angled cut steel girder. That was NOT done by any of the responding rescue/recovery personnel. Many other remnants exhibit the same pattern, which is exactly the angle used when planting charges for controlled demolition. A coincidence?

Abstract: "We have discovered distinctive red/gray chips in all the samples we have studied of the dust produced by the destruction of the World Trade Center. Examination of four of these samples, collected from separate sites, is reported in this paper. These red/gray chips show marked similarities in all four samples. One sample was collected by a Manhattan resident about ten minutes after the collapse of the second WTC Tower, two the next day, and a fourth about a week later. The properties of these chips were analyzed using optical microscopy, scanning electron microscopy (SEM), X-ray energy dispersive spectroscopy (XEDS), and differential scanning calorimetry (DSC). The red material contains grains approximately 100 nm across which are largely iron oxide, while aluminum is contained in tiny plate-like structures. Separation of components using methyl ethyl ketone demonstrated that elemental aluminum is present. The iron oxide and aluminum are intimately mixed in the red material. When ignited in a DSC device the chips exhibit large but narrow exotherms occurring at approximately 430 °C, far below the normal ignition temperature for conventional thermite. Numerous iron-rich spheres are clearly observed in the residue following the ignition of these peculiar red/gray chips. The red portion of these chips is found to be an unreacted thermitic material and highly energetic.

Based on these observations, we conclude that the red layer of the red/gray chips we have discovered in the WTC dust is active, unreacted thermitic material, incorporating nanotechnology, and is a highly energetic pyrotechnic or explosive material. In short, the paper explodes the official story that 'no evidence' exists for explosive/pyrotechnic materials in the WTC buildings. The red/gray chips are the "loaded gun" of 9-11."