"The Death of Goldman Sachs?" 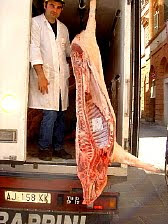 "The Death of Goldman Sachs?"
by Steven G. Brant
"I saw something die Tuesday. It didn't die accidentally either. It was killed. This was a very painful event to watch, not just because death is tragic and not because this death was intentional rather than accidental. It was very painful to watch because the thing being killed didn't even know it was dying... and it didn't know it was actually participating in its own death. It didn't know it was helping the hangman not just put the noose around its neck but helping the hangman open the trap door under its feet.

What died Tuesday was Goldman Sachs. It has existed for 140 years. But Tuesday all that ended, as the head of Goldman Sachs, Lloyd Blankfein, in his prepared remarks before the Senate Governmental Affairs Subcommittee on Investigations, said "We have been a client-centered firm for 140 years and if our clients believe that we don't deserve their trust, we cannot survive." That was Lloyd Blankfein putting the noose around Goldman Sachs' neck. And then - in his opening exchange with Subcommittee chair Senator Carl Levin - Lloyd Blankfein proved that Goldman Sachs absolutely, positively does not deserve the trust of its clients. That was Lloyd Blankfein helping open the door under Goldman Sachs' feet. In his Senate appearance, Lloyd Blankfein participated in the death of his own company. It was really a stunning thing to watch. I expect Goldman Sachs to be out of business by the end of this year and maybe before the November election. That's just my opinion, of course. I predict it will be viewed for years to come by students of business ethics but also by students of famous moments in the civic life of America. I believe this moment will be seen on par with the famous incident in which Senator McCarthy was brought down with the simple question "Have you no sense of decency?"

Senator Carl Levin's simple question - the one that killed Goldman Sachs - was "Do you think it's proper for Goldman Sachs to bet against the security it is selling to a client without telling that client that it is making that bet?" Mr. Blankfein said over and over again that it was proper for Goldman Sachs to do what they had done. He even said at one point that the minute Goldman Sachs sells something to its customer, it no longer owns that security and has "the opposite interest" to its client regarding that security. This was just one of many breathtaking moments, as I could tell that Mr. Blankfein had no idea what he was doing to his firm.

In late 2001, the collapse of ENRON led to the death of the legendary accounting firm Arthur Andersen. Arthur Anderson's reputation was unmatched in the field; but, in 2002, Arthur Andersen was found guilty of criminal charges related to its auditing of ENRON and gave up its license to practice accounting.

Reuters reported on Mr. Blankfein's testimony. In their report, they suggest Goldman's reputation has taken a big hit. Remember, a company can go down if its reputation falls to junk status. It would be a fitting "final act" if the company that had no problem selling "crap" (the term Sen. Levin used) were to go out of business because its reputation was now seen as "crap" as well. From the Reuters report: ‘Blankfein was frequently interrupted, told to answer the question and stick to the point. He often squinted as if puzzled by the questions and sometimes gave hesitant answers. He said, as a market maker, it was not Goldman's responsibility to tell customers how to trade or invest. Clients "are not coming to us to represent what our views are, they probably wouldn't care what our views are. They shouldn't care."

The hearing came less than two weeks after the U.S. Securities and Exchange Commission filed a civil fraud suit against Goldman, charging that it hid vital information from investors about a mortgage-related security.

Edward Rogers, CEO of Tokyo-based hedge fund advisor Rogers Investment Advisors said Goldman's difficulties could hurt its ability to retain talent. "The government hates you. Your friends throw tomatoes at you. You are evil now. You are not the smart guy in the room - you are the evil, twisted greedy crook guy," said Rogers.

Criminal behavior. No trust. Reputation destroyed. No customers. Firm dead. Welcome to the Arthur Andersen reality, Goldman Sachs. Civil charges of fraud brought, and there may be more coming. No trust. Reputation destroyed. No customers. Firm dead. What a fascinating time we are living in. If things really do play out the way they did with ENRON and Arthur Andersen - and I think they will - I guess we'll be able to say that there is such a thing as white-collar justice in America.”
- http://www.huffingtonpost.com/steven-g-brant/the-death-of-goldman-sach_b_554371.html