"Suffering Souls: The Search For the Roots of Psychopathy" 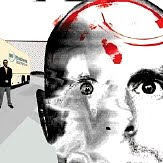 "Suffering Souls:
The Search For the Roots of Psychopathy"
by John Seabrook
"The Western New Mexico Correctional Facility sits in high-desert country about seventy miles west of Albuquerque. Grants, a former uranium boomtown that depends heavily on prison work, is a few miles down the road. There’s a glassed-in room at the top of the prison tower, with louvred windows and, on the ceiling, a big crank that operates a searchlight. In a box on the floor are some tear-gas shells that can be fired down into the yard should there be a riot. Below is the prison complex—a series of low six-sided buildings, divided by high hurricane fences topped with razor wire that glitters fiercely in the desert sun. To the east is the snow-covered peak of Mt. Taylor, the highest in the region; to the west, the Zuni Mountains are visible in the blue distance.

One bright morning last April, Dr. Kent Kiehl strode across the parking lot to the entrance, saying, “I guarantee that by the time we reach the gate the entire inmate population will know I’m here.” Kiehl—"the Doc," as the inmates call him—was dressed in a blue blazer and a yellow tie. He is tall, broad-shouldered, and barrel-chested, with neat brown hair and small ears; he looks more like a college football player, which was his first ambition, than like a cognitive neuroscientist. But when he speaks, in an unexpectedly high-pitched voice, he becomes that know-it-all kid in school who intimidated you with his combination of superior knowledge and bluster.

At thirty-eight, Kiehl is one of the world’s leading younger investigators in psychopathy, the condition of moral emptiness that affects between fifteen to twenty-five per cent of the North American prison population, and is believed by some psychologists to exist in one per cent of the general adult male population. (Female psychopaths are thought to be much rarer.) Psychopaths don’t exhibit the manias, hysterias, and neuroses that are present in other types of mental illness. Their main defect, what psychologists call “severe emotional detachment”—a total lack of empathy and remorse—is concealed, and harder to describe than the symptoms of schizophrenia or bipolar disorder. This absence of easily readable signs has led to debate among mental-health practitioners about what qualifies as psychopathy and how to diagnose it. Psychopathy isn’t identified as a disorder in the Diagnostic and Statistical Manual of Mental Disorders, the American Psychiatric Association’s canon; instead, a more general term, “antisocial personality disorder,” known as A.P.D., covers the condition.

There is also little consensus among researchers about what causes psychopathy. Considerable evidence, including several large-scale studies of twins, points toward a genetic component. Yet psychopaths are more likely to come from neglectful families than from loving, nurturing ones. Psychopathy could be dimensional, like high blood pressure, or it might be categorical, like leukemia. Researchers argue over whether tests used to measure it should focus on behavior or attempt to incorporate personality traits—like deceitfulness, glibness, and lack of remorse—as well. The only point on which everyone agrees is that psychopathy is extremely difficult to treat. And for some researchers the word “psychopath” has been tainted by its long and seamy relationship with criminality and popular culture, which began with true-crime pulps and continues today in TV shows like CBS’s “Criminal Minds” and in the work of authors like Thomas Harris and Patricia Cornwell. The word is so loaded with baleful connotations that it tends to empurple any surrounding prose.

Kiehl is frustrated by the lack of respect shown to psychopathy by the mental-health establishment. “Think about it,” he told me. “Crime is a trillion-dollar-a-year problem. The average psychopath will be convicted of four violent crimes by the age of forty. And yet hardly anyone is funding research into the science. Schizophrenia, which causes much less crime, has a hundred times more research money devoted to it.” I asked why, and Kiehl said, “Because schizophrenics are seen as victims, and psychopaths are seen as predators. The former we feel empathy for, the latter we lock up.”

In January of 2007, Kiehl arranged to have a portable functional magnetic-resonance-imaging scanner brought into Western—the first fMRI ever installed in a prison. So far, he has recruited hundreds of volunteers from among the inmates. The data from these scans, Kiehl hopes, will confirm his theory, published in "Psychiatry Research," in 2006, that psychopathy is caused by a defect in what he calls “the paralimbic system,” a network of brain regions, stretching from the orbital frontal cortex to the posterior cingulate cortex, that are involved in processing emotion, inhibition, and attentional control. His dream is to confound the received wisdom by helping to discover a treatment for psychopathy. “If you could target the brain region involved, then maybe you could find a drug that treats that region,” he told me. “If you could treat just five per cent of them, that would be a Nobel Prize right there.”
The rest of this (long) article can be found here:
- http://www.newyorker.com/reporting/2008/11/10/081110fa_fact_seabrook
?currentPage=all#ixzz0mKo6bxhM
Posted by CoyotePrime at 1:28 PM