"What’s YOUR Share of the National Debt?"
By Chuck Butler
"Last July, I gave a presentation at the Agora Investment Symposium in Vancouver, BC at that time I told the audience that each US citizen’s share of the national debt had grown to $35,000. Just for grins, I thought I would check on how we’re doing with that. Well, 9 months later, our national debt has exploded! Each citizen’s share of this national debt is now $41,670! OH! But, that’s today… when you take into consideration our liability per citizen when adding in the unfunded liabilities (you know, Social Security, Medicare, Medicaid) it’s a nice $350,700!
So, we can go on with our deficit spending, and sooner or later, love is gonna get ya. And in addition, we’ll be getting our debt rating reduced, yes, just ask Japan, who got a warning missile fired across their bow last week by the rating agency, FITCH, who warned that Japan’s debt rating might be lowered. But, the most important thing to remember, folks, is this: the more you spend, the more you need to borrow and finance. And there are consequences to this, higher rates, and a cheaper dollar will be needed to attract buyers of our Treasuries, which are used to finance the debt. So, the next time someone from Congress is in your neighborhood, ask them this simple question, 'How do they expect to pay for their deficit spending?' And don’t expect bull dookie answers!
OK, so the other day, I’m watching TV, passing some time, and a commercial comes on with the new CEO of General Motors (GM) and he says, “We’ve paid our debt back in full.” I thought Whoa! That’s impressive, I’m going to have to go back and think about this! I mean, shoot Rudy, GM has paid back the taxpayers? How’d they do it? But then, there it was, in my Sunday paper… GM’s “paid in full” is short by $53 billion! I knew that claim sounded fishy! Yes, apparently the GM CEO forgot about the $45 billion that the taxpayers gave them, and the $8 billion Canada gave them. According to David Nicklaus, the $53 billion was converted to stock during GM’s bankruptcy. “The only realistic way for GM to repay that money is to do an initial public stock offering (IPO).” So, the next time that commercial comes on the TV, you can basically say, “Liar, liar, pants on fire!”
OK, now, if you don’t want to get sick to your stomach, you might want to skip ahead to the Big Finish, but I have to tell you first, just to get a taste of the goings on the past few years on Wall Street, this from Bloomberg: "Fabrice Tourre, a Goldman Sachs Group Inc. executive director facing a fraud lawsuit in the sale of a mortgage-linked investment, said an index that facilitated derivatives trading in the market was “like Frankenstein.” The so-called ABX index is “the type of thing which you invent telling yourself: ‘Well, what if we created a ‘thing,’ which has no purpose, which is absolutely conceptual and highly theoretical and which nobody knows how to price?’” Tourre said in a Jan. 29, 2007, e-mail released yesterday by Goldman Sachs. Watching the index fall is “a little like Frankenstein turning against his own inventor.”
If you think like me, (and heaven help you if you do! HA!) then reading things like this just make you shake your head in disgust… and then wonder why people like that are allowed to walk around free!"
- http://dailyreckoning.com/us-debt-crisis-what’s-your-share-of-the-national-debt/
•
Which brings us here:

(Updated 2-12-2010) "Interest expense on the United States debt is an unstoppable time bomb. Fiscal year 2008 annual debt interest set a new record totaling $451 billion dollars. That was before the government added trillions more to our debt, virtually overnight, in a futile effort to keep their Keynesian scheme afloat. Absurdly low interest rates prevented our 2009 interest expense from eclipsing 2008, yet in spite of the lowest rates in over 70 years, it still came close. 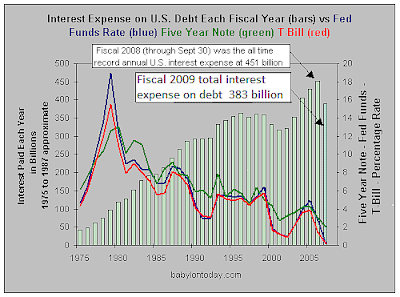 Total debt as of fiscal year 2009 end was 11.9 trillion dollars. Three month T-bill rates for fiscal '09 (Oct 1 '08 to Sept 30 '09) averaged about .21%, or about two tenths of one percent, interest. Encarta article: "Maturity of U.S. debt ranges from less than a year to over 20 years, with the average maturity about 3 years. More than half of the debt, however, is short term, maturing in less than a year."
This means that if rates on 3 month T-bills went to just 1%, interest on just this short-term financed HALF of our debt would increase by a factor of at least 5 times, by the end of the year. Interest on half of 11.9 trillion (6 trillion) at .2% was about 12 billion. Five times that is 60 billion. If rates went to just 2%, the interest owed on this short-term financed HALF of our debt, would be 120 billion by the end of a single year. All other maturities would increase by greater percentages depending on the time length of the instruments. Since Moody's recently announced they are considering downgrading their rating on U.S. debt, could rates skyrocket to banana republic levels?"
- http://www.babylontoday.com/national_debt_clock.htm
Posted by CoyotePrime at 9:26 AM