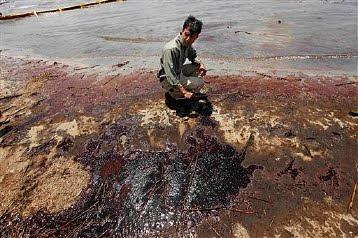 "Third Giant Underwater Oil Plume Discovered"
by Washington's Blog
"The New York Times reported on May 15th: 'Scientists are finding enormous oil plumes in the deep waters of the Gulf of Mexico, including one as large as 10 miles long, 3 miles wide and 300 feet thick in spots. The discovery is fresh evidence that the leak from the broken undersea well could be substantially worse than estimates that the government and BP have given. “There’s a shocking amount of oil in the deep water, relative to what you see in the surface water,” said Samantha Joye, a researcher at the University of Georgia who is involved in one of the first scientific missions to gather details about what is happening in the gulf. “There’s a tremendous amount of oil in multiple layers, three or four or five layers deep in the water column.” The plumes are depleting the oxygen dissolved in the gulf, worrying scientists, who fear that the oxygen level could eventually fall so low as to kill off much of the sea life near the plumes.'

AP reported on May 27th that scientists had found a second giant plume deep under the water. The plume is 22 miles long and 6 miles wide.

Today, the Washington Post is reporting that a third giant underwater plume has been discovered: "A Louisiana scientist said his crew had located another vast plume of oily globs, miles in the opposite direction. James H. Cowan Jr., a professor at Louisiana State University, said his crew on Wednesday found a plume of oil in a section of the gulf 75 miles west of the source of the leak. Cowan said that his crew sent a remotely controlled submarine into the water, and found it full of oily globules, from the size of a thumbnail to the size of a golf ball....Cowan said the oil at this site was so thick that it covered the lights on the submarine. "It almost looks like big wet snowflakes, but they're brown and black and oily," Cowan said. The submarine returned to the surface entirely black, he said. Cowan said that the submarine traveled about 400 feet down, close to the sea floor, and found oil all the way down. Trying to find the edges of the plume, he said the submarine traveled miles from side to side. "We really never found either end of it," he said. He said he did not know how wide the plume actually was, or how far it stretched away to the west."

As I have previously pointed out, the use of dispersants by BP may be making matters worse. The Washington post article notes: "Cowan's finding underscores concerns about oil moving under the surface, perhaps because of dispersant chemicals that have broken it up into smaller globules. BP officials have played down the possibility of undersea oil plumes. This discovery seems to confirm the fears of some scientists that - because of the depth of the leak and the heavy use of chemical "dispersants" - this spill was behaving differently than others. Instead of floating on top of the water, it may be moving beneath it.

That would be troubling because it could mean the oil would slip past coastal defenses such as "containment booms" designed to stop it on the surface. Already, scientists and officials in Louisiana have reported finding thick oil washing ashore despite the presence of floating booms. It would also be a problem for hidden ecosystems deep under the gulf. There, scientists say, the oil could be absorbed by tiny animals and enter a food chain that builds to large, beloved sport-fish like red snapper. It might also glom on to deep-water coral formations, and cover the small animals that make up each piece of coral. "You're almost like a deer in the headlights when you're watching this. You don't know what to say," Cowan said. He said the oil's threat to undersea ecosystems "is really starting to scare us."
- http://georgewashington2.blogspot.com/2010/05/third-giant-underwater-oil-plume.html
Posted by CoyotePrime at 3:17 PM