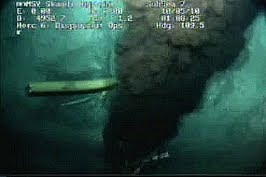 "In another serious setback in the effort to stem the flow of oil gushing from a well a mile beneath the Gulf of Mexico, BP engineers said Saturday that the “top kill” technique had failed and, after consultation with government officials, they had decided to move on to another strategy. Doug Suttles, BP’s chief operating officer for exploration and production, said at a news conference that the engineers would try once again to solve the problem with a containment cap and that it could take four to seven days for the device to be in place. “After three full days of attempting top kill, we now believe it is time to move on to the next of our options,” Mr. Suttles said.

The abandonment of the top kill technique, the most ambitious effort yet to plug the well, was the latest in a series of failures. First, BP failed in efforts to repair a blowout preventer with submarine robots. Then its initial efforts to cap the well with a containment dome failed when it became clogged with a frothy mix of frigid water and gas. Efforts to use a hose to gather escaping oil have managed to catch only a fraction of the spill. BP has started work on two relief wells, but officials have said that they will not be completed until August — further contributing to what is already the worst oil spill in United States history. The latest failure will undoubtedly put more pressure — both politically and from the public — on the Obama administration to take some sort of action, perhaps taking control of the repair effort completely from BP.

President Obama, who is spending the Memorial Day weekend in Chicago, issued a statement Saturday evening on the decision to abandon the top kill. “While we initially received optimistic reports about the procedure, it is now clear that it has not worked,” Mr. Obama said. He said that Rear Adm. Mary E. Landry of the Coast Guard had “directed BP to launch a new procedure whereby the riser pipe will be cut and a containment structure fitted over the leak.” “This approach is not without risk and has never been attempted before at this depth,” Mr. Obama said. “That is why it was not activated until other methods had been exhausted.” The president continued, “We will continue to pursue any and all responsible means of stopping this leak until the completion of the two relief wells currently being drilled.”

For BP, the besieged British company, the failure could mean billions of dollars of additional liabilities, as the spill potentially worsens in the weeks and months ahead. “I am disappointed that this operation did not work,” Tony Hayward, chief executive of BP, said in a statement. “We remain committed to doing everything we can to make this situation right.”

A technician who has been working on the project to stem the oil leak said Saturday that neither the top kill nor the “junk shot” came close to succeeding because the pressure of oil and gas escaping from the well was simply too powerful to overcome. He added that engineers never had a complete enough understanding of the inner workings of drill pipe casing or blowout preventer mechanisms to make the efforts work. “Simply too much of what we pumped in was escaping,” said the technician, who spoke on condition of remaining unnamed because he is not authorized to speak publicly for the company. “The engineers are disappointed, and management is upset,” said the technician. “Nothing is good, nothing is good.”
- http://www.nytimes.com/2010/05/30/us/30spill.html?ref=global-home

An interactive photo gallery of the disaster is here:
http://www.nytimes.com/interactive/2010/05/27/us/201005_oil-spill-photo-gallery.html?ref=us
Posted by CoyotePrime at 10:05 AM