"Delays Feared as BP Relief Bore Nears Well"
By Sheila McNulty
"Almost 6,060m below the surface of the Gulf of Mexico and 4,500m below the seabed, BP’s engineers are zeroing in on a narrow target: the 25cm-wide steel casing of its old Macondo well, which has been leaking oil since late April.The energy company hopes that two relief wells will soon hit the old pipe, paving the way to stop the gusher. The operation has no precedent at the depth that BP is operating, but a review of similar efforts in shallower waters and the opinion of geologists and petroleum engineers point to a discomforting possibility: the relief well might not work on the first try, leaving open the risk of delays. 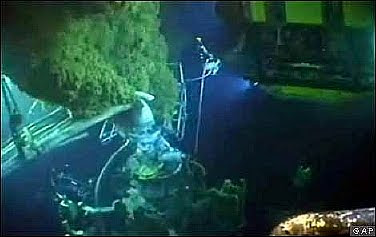 An underwater robot moves towards the leaking well.
While those in the industry believe the relief wells will eventually stop the oil, they note the scale of the challenge. In addition to the depth, the original drilling process suffered several setbacks because of the difficult geology and pressures. “Drilling a well thousands of feet into rock to hit a target no more than six inches [15cm] wide isn’t exactly a sure thing,” says Guy LeBas, strategist at Janney Capital Markets. “There remains a risk that the leak could continue past August.”

BP, under pressure from Washington, is drilling two relief wells to multiply the chances of success. The company is aiming to intersect the original wellbore above the oil reservoir. Once the relief well intersects the original well, BP will drill through the cement that encapsulates the wellbore and then, using a special tool, drill the steel casing. The intersection is targeted for a section of the pipe that is less than 10 inches in diameter. “It may take a couple of tries,” says Jonathan Parry, of consultants IHS CERA and who previously worked as a deepwater engineering advisor for Chevron. “It may take more than one relief well,” Mr Parry says. Experience suggests that it can take several attempts – and more time than BP has so far admitted.

More than three decades ago, in another oil leak in the Gulf of Mexico, engineers took six months to stop a gusher. And last year, in waters off Australia, five attempts were needed. “It is extremely difficult,” says a geologist. Oil engineers warn that the extra attempts do not require a full, new relief well, however. If BP fails to intersect the well at its first attempt, the engineers will backtrack and use their directional drilling systems, which allow them to move their drill like a snake. Each attempt will take days or weeks, rather than the three months needed to drill a new well, they say. And the vast improvement in directional drilling and sensing techniques, which allow engineers to “see” underground, over the past few years will help BP notably.

BP has reported no problems so far and last week said engineers knew they were closing in. Kent Wells, BP’s senior vice-president of exploration and production, said last week the first of the two relief wells was now “within 200 feet [66m] of the well”. BP said engineers would now try to narrow the range and continue to deepen the well while they approached the old Macondo well, a process that will require the engineers to slow down significantly. “While we’re extremely encouraged on how well the top part of the well has gone, and we’re ahead of schedule, this will be slower paced as we range and accurately locate this well to the existing well,” Mr Wells said.

Oil engineers say relief wells have always worked in the past – eventually. However, David Stegemeir of PFC Energy says a blow-out preventer has rarely failed before. And on this well, not only did the blow-out preventer fail but one rig was damaged, a second exploded and a third was hit by lightning. “Personally, I think this well is cursed.”
- http://www.ft.com/cms/s/0/a20fb29a-8202-11df-938f-00144feabdc0.html
A comment: This article assumes that the original steel well pipe has not been completely destroyed, either in the initial incident, or by 69 days of "scouring" by escaping crude oil, rocks, dirt and methane gas. If it has in fact been destroyed there is nothing for the relief well to utilize in sealing the rupture. Industry experts including Matthew Simmons believe this to be the case. - CP