The Economy: "The Three Biggest Lies About the Economy" 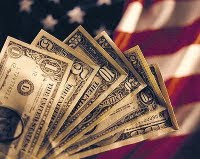 "The Three Biggest Lies About the Economy"
by Brett Arends
"The G-20 calls for members to slash their budget deficits. The U.S. Senate ices further aid for the unemployed. The head of the Business Roundtable slams President Obama for undermining American capitalism. Wall Street succeeds in watering down reform. Depending on your politics, you'll love this or hate it. But there's just one problem. We're still living in a fantasyland. Most people have no idea what's really going on in the economy. They're living on spin, myths and downright lies. And if we don't know the facts, how can we make intelligent decisions? Economists worry that jobs, consumer confidence readings won't support hope for economic recovery, Barrons.com's Bob O'Brien reports. Here are the three biggest economic myths - the things everything thinks they know about the economy that just ain't so.

Myth 1: Unemployment is below 10%. What nonsense that is. The official jobless rate, at 9.7%, is a fiction and should be treated as such. It doesn't even count lots of unemployed people. The so-called "underemployment" or U-6 rate is an improvement: For example it counts discouraged job seekers, and those forced to work part-time because they can't get a full-time job. That rate right now is 16.6%, just below its recent high and twice the level it was a few years ago And even that may not tell the full story. Many people have simply dropped out of the labor force statistics.

Consider, for example, the situation among men of prime working age. An analysis of data at the U.S. Labor Department shows that there are 79 million men in America between the ages of 25 and 65. And nearly 18 million of them, or 22%, are out of work completely. (The rate in the 1950s was less than 10%.) And that doesn't even count those who are working part-time because they can't get full-time work. Add those to the mix and about one in four men of prime working age lacks a full-time job. Dean Baker, economist at the Center for Economic and Policy Research in Washington, D.C., says the numbers may be even worse than that. His research suggests a growing number of men, especially in deprived, urban and minority neighborhoods, have vanished from the statistical rolls altogether.

Myth 2: The markets are panicking about the deficit. To hear the G-20 tell it, the U.S. and other top countries had better slash those budget deficits before the world comes to an end. And maybe the markets should be panicking about the deficits. But they're not. It's that simple. If they were, the interest rate on government bonds would be skyrocketing. That's what happens with risky debt: Lenders demand higher and higher interest payments to compensate them for the dangers. But the rates on U.S. bonds have been plummeting recently. The yield on the 30-year Treasury bond down to just 4%. By historic standards that's chickenfeed. Panicked? The bond markets are practically snoring.

They aren't seeing inflation either. On the contrary, they're saying it will average just 2.3% a year over the next three decades. That's the gap between the interest rates on inflation-protected Treasury bonds and the rates on the regular bonds. By any modern standard the forecast is low. Instead of worrying about inflation, some are starting to worry about something even more dangerous: deflation, or falling prices. If that takes hold, cutting spending and raising taxes would be a bad move.

It's certainly possible the lenders buying these bonds are being foolish. And it's worth noting that the Treasury market is also subject to political distortions, because foreign are among the heavy buyers of bonds. So it's worth treating its apparent verdicts with some caution. Nonetheless, the burden of proof, as usual, is on those who argue the market is wrong.

Myth 3: The U.S. is sliding into "socialism." For a system allegedly being strangled in its bed, U.S. capitalism seems to be in astonishingly robust shape. Numbers published by the Federal Reserve a few weeks ago show that corporate profit margins have just hit record levels. Indeed. Andrew Smithers, the well-regarded financial consultant and author of "Wall Street Revalued," calculates from the Fed's latest Flow of Funds report that corporate profit margins rocketed to 36% in the first quarter. Since records began in 1947 they have never been this high. The highest they got under Ronald Reagan was 30%.

The picture is also similar when you exclude financials. The Dow Jones Industrial Average (DJIA 9,881, +10.21, +0.10%) is above 10,000. Small company stocks have rallied astonishingly since early last year: The Russell 2000 index is back to levels seen not long before Lehman imploded. Meanwhile Cap Gemini's latest Wealth Report notes that the North American rich saw an 18% jump in their wealth last year. Meanwhile, federal spending, about 25% of the economy this year, is expected to fall to about 23% by 2013. In 1983, under Ronald Reagan, it hit 23.5%. In the early 1990s it was around 22%. Some socialism.

These days, three-fifths of the entire budget goes on just three things: Insurance for our old age (through Social Security and Medicare), defense, and debt interest. Conservatives don't want to cut the $700 billion-plus we spend on defense. We can't cut debt interest payments. And while Social Security and Medicare certainly need reform, the main "problems" are simply rising life expectancy and health care demands. If we didn't provide for the insurance through our taxes we'd have to do it individually.

What about the rest of the budget? It's jumped from around 7% of GDP a few years ago to about 10% now. Out of control? It's been in the 6% to 9% range for decades. It's forecast to fall to about 8% again in a few years. So much for a revolution. But here comes the counter-revolution just the same."
- http://www.marketwatch.com/
Posted by CoyotePrime at 10:53 AM