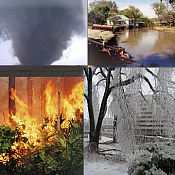 "Environmental Catastrophe Fatigue"
By Alan Farago
"Since the Gulf oil spill catastrophe, more than two months ago, I have dropped in regularly to the excellent online coverage by the Times-Picayune in New Orleans. Recently the web edition of the the newspaper has segregated the Gulf oil spill catastrophe into a special section, relieving readers and subscribers from a ceaseless tide of bad news. To be fair, the Times Picayune has an entire click-thru feature filled with news and information of the unfolding Gulf catastrophe, but I'm not imagining the necessity of sublimation. Americans are an "up" people. We are not weighted down by history. We are inventors, entrepreneurs and builders. The paper is responding to a phenomenon well-known to close observers: environmental catastrophe fatigue.

People tune out. It is one reason that large environmental organizations focus on the iconic symbols of the environment: polar bears, whales or wolves. The gritty details of oil washing onto beaches and into wetlands, one tide after another, is different. On the blog- eyeonmiami.blogspot.com- I have written about the Gulf oil catastrophe nearly every day since the BP Deepwater Horizon tragically exploded. As a writer and expert witness on subjects of environmental and political failure, I was determined to use repetition to chronicle how America's worst environmental disaster was the natural culmination of decades weakening laws and ensuring that new technologies and profits would not be hindered by protections that might otherwise be afforded public health, our air, water and climate. And our blog readership numbers dropped. I'm guessing the same happened with the online edition of The Times-Picayune, and so the newspaper changed its online edition layout.

I noticed a related phenomenon: that the best visuals in the news online were appearing in newspapers and online editions far from the source of the spill. The Boston Globe, for example, dedicated more comprehensive coverage to the visuals of the oil catastrophe than The Miami Herald. Too much bad news, too close to home, is bad for profits. If the bad news is fifteen hundred miles away, or further, that's another story. At the same time, it is interesting that the Gulf oil catastrophe has pushed news even more calamitous- America's ceaseless wars in Iraq and Afghanistan- deeper into the half hour.

Car crashes, yes. Because we are united by the belief; there but for the grace of God, go I. But environmental catastrophe like the Gulf Oil spill or climate change triggers something else. Depression, anxiety, and a sense of futility. Somewhere in the news, we are making a positive difference.

The wise forefathers of the United States conceived a government set against the blue skies of a rich continent, filled with forests, minerals, and natural bounty. We've tapped out. (Watch "Gasland" on HBO, for a clear picture of the new American landscape, organized around the natural gas industry.) The notion of limits-- that our economic prosperity should be guided by precaution now that we have picked all the low hanging fruit to fuel our centuries of industrial progress-- is heretical to a large segment of the American population. It is the gutteral chant: we are not Sweden or Denmark or "Old Europe": USA! Along this line, it is no coincidence that their standard bearer, Sarah Palin, comes from a frontier state- Alaska- where wilderness values of the original America are largely intact despite oil drilling. Nor is it a coincidence that the GOP leadership in Congress, during the Bush terms, chose an Alaskan- Don Young- to head the powerful House Natural Resources Committee that telegraphed its intent by dropping the word "environment" from its name.

From this demographic of the American population, a hysterical conviction arises that the US Constitution, cast in stone like Moses' tablet, is immune to the influence of toxics or climate change. With the Constitution folded in our back pockets like a cheat sheet, we adapt easily to bad news: we tune it out. Along this line, perhaps BP could fund relocation expenses for Gulf Coast residents who cherish dolphin, turtles, and pelicans but remain committed to weak federal regulation of oil and gas industries. Let the State of Alaska, its long winters and grizzly bears, take them in. For descendants of Acadians in Louisiana bayous, being forced from homes into the cold would be doubling-back on history. It's freezing in Alaska but warmer with every passing season."
- http://counterpunch.org/farago06282010.html
•
Alan Farago, conservation chair of Friends of the Everglades, lives in south Florida.
He can be reached at: afarago@bellsouth.net
Posted by CoyotePrime at 1:13 PM