"US, Iran Mobilizing - Are We Going to War?" When Aren't We? 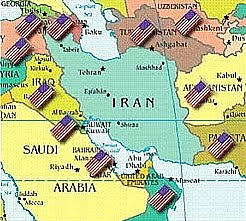 "US, Iran Mobilizing - Are We Going to War?"
When Aren't We?
by Mac Slavo
"On May 21, 2010 we reported that the President was deploying four carrier groups to the Persian Gulf. The report originated from the Debka File and was discounted by many as disinformation originating from Iran. It turns out that these reports were correct, as we have recently learned: "…the Obama administration has ordered a massive buildup of U.S. forces in the Persian Gulf starting with Carrier Strike Group 10, headed by the USS Harry S. Truman aircraft carrier. Just last Friday an armada of more than 12 U.S. and Israeli warships passed through the Suez canal amid extreme security provided by Egypt. The ships are headed for the Red Sea and from there to the Persian Gulf. Another four U.S. warships will be making their way to the region to join the Strike Group. The Americans have also conducted joint air and naval strike practices with France and the U.K. under the command of American forces, while Germany is sending warships to the area, also under the command of American forces. Both Israel and the U.S. have positioned nuclear-armed submarines in the region."

At first glance, this may look like President Obama is deploying the Navy in order to enforce strict sanctions against Iran because of their nuclear program. However a former CIA spy deep inside the Iranian Republican Guard and author of the book "A Time to Betray," Reza Kahlili (name changed to protect his identity), says that there will be war and the only way to avoid it is to immediately support the Iranian people in an overthrow of their current government: "One year ago, the Obama administration missed an opportunity to support Iran’s uprising. They mistakenly calculated that back-door negotiations with Iran’s clerics and promises made by its rulers would bring cooperation on the nuclear issue. The Americans were duped and now find themselves grasping for another chance to support an Iranian uprising.

The clock is ticking and the lives of hundreds of thousands–if not millions–are at stake. Now is the time to pursue all non-violent approaches: cut all diplomatic ties, expel Iranian officials and openly support the people of Iran. Only with international support will Iran’s people be emboldened to rebel and will regime loyalists abandon ship. The desire to overthrow the regime is already so great within Iran that this alone could be enough to lead to successful rebellion. According to Kahlili, we dropped the ball by not taking a stand when Iranian were protesting and being murdered in the streets. This was a golden opportunity, and we missed it."

Now it looks like things are getting very serious. The US and Israel aren’t the only ones mobilizing: Iran, for its part, is also preparing for an all-out war in the Middle East. Before even a vote was cast at the U.N. on recent sanctions, Iranian leaders had ordered the Guards to build up. Reinforcement troops have been dispatched to the Iraqi and Afghanistan borders. Hezbollah has been armed to the teeth, and Syria was presented with missiles carrying larger payloads and longer range.

Meanwhile Iran is busy pursuing its nuclear bomb project and enriching its supply of uranium faster than ever before, with the hope of testing its first nuclear bomb. Accomplishing this will fulfill the prophecy sought by the radical members of the secretive society of Hojjatieh, particularly its leader Ayatollah Mesbah Yazdi, the person responsible for the initial election and fraudulent re-election of Mahmoud Ahmadinejad. The Hojjatieh movement impatiently seeks the end of times and the return of Imam Mahdi, the last messiah.

It is debatable that Iran is building a nuclear weapon. Do we just blindly follow our government about Iran’s nuclear production like we did in 2002 with Iraq and WMD? Or is it possible that there are bigger agendas at play? Up for consideration are a number of potentially conpiratorial, yet plausible thoughts: There are millions of gallons of oil in the region and we need it, especially if new policies make it difficult if not impossible to drill in the USA. If we leave the Middle East, then who gets all of the oil in Iran and Iraq, and all the minerals in Afghanistan? Do we just let China and Russia have it? This is much bigger than just our need to get our fill of oil. If leave the Middle East, the Chinese and Russians will swoop in and seize control.

When economies of countries collapse, politicians can never look in the mirror and blame themselves. While Americans are pointing their fingers at Congress and threatening to protest in the streets with pitchforks, our politicians will be looking to blame someone. If necessary, they will manufacture a crisis to make this reality. It’s an election year, after all, and everyone knows that Presidents, Congressmen and Senators don’t get voted out of office if there is a war or significant terror threat. Whatever the case may be, it’s looking more and more like Iran will eventually be engaged bilaterally by US and Israeli forces.

We’d like to think that the US Navy is in the region just to enforce sanctions and embargo Iran, but with all the Axis of Evil rhetoric against Iran for the better part of the last decade, our view is that there is a strong possibility of serious confrontation. We may very well be witnessing the precursors to World War III.

UPDATE: An update from the DebkaFile via Check It News reports that Iran has declared a state of war in its northwest region: "In a rare move, Iran has declared a state of war on its northwestern border, DebkaFile’s military and Iranian sources report. Iranian Revolutionary Guards Corps men and equipment units are being massed in the Caspian Sea region against what Tehran claims are US and Israeli forces concentrated on army and air bases in Azerbaijan ready to strike Iran’s nuclear facilities.

The announcement came on Tuesday, June 22 from Brig-Gen. Mehdi Moini of the Revolutionary Guards (IRGC), commander of the forces tasked with “repelling” this American-Israeli offensive. He said: “The mobilization is due to the presence of American and Israeli forces on the western border,” adding, “Reinforcements are being dispatched to West Azerbaijan Province because some western countries are fueling ethnic conflicts to destabilize the situation in the region.”
- http://www.shtfplan.com/headline-news/
Author: Mac Slavo. Visit the Author's Website: http://www.SHTFplan.com/
•••
The fun just never stops, does it, folks? Bringing more "democracy"...

"How vast those Orbs must be, and how inconsiderable this Earth, the Theatre upon which all our mighty Designs, all our Navigations, and all our Wars are transacted, is when compared to them. A very fit consideration, and matter of Reflection, for those Kings and Princes who sacrifice the Lives of so many People, only to flatter their Ambition in being Masters of some pitiful corner of this small Spot." - Christiaan Huygens, (1629 –1695)
Posted by CoyotePrime at 11:28 AM

Email ThisBlogThis!Share to TwitterShare to FacebookShare to Pinterest
Labels: us iran war