The Economy: "Corporatocracy Has Replaced Capitalism" 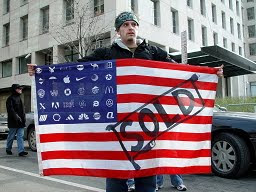 "Corporatocracy Has Replaced Capitalism"
by D Sherman Okst
"Capitalism Fixes Problems & Preserves Democracy: Capitalism is what we should be relying on to fix our problems. Capitalism has it's own ecosystem, just like biology's ecosystem. An economic ecosystem that weeds out the weak, has parasites that eat the failures and new bacteria that evolves and grows replacements for that which failed. A system that keeps everything in balance.

The problem is we are no longer a capitalistic society. What we were taught in school is now utter and absolute nonsense. Capitalism is a thing of the past. As outlined in "It's Not A Financial Crisis - It's A Stupidity Crisis", we created two back to back bubbles. The air out of the Tech Bubble was sucked up for fuel by our next stupidity crisis: The Housing Bubble. Now, after the second Stupidity Crisis there isn't a third bubble to inflate. If we still lived in a capitalistic environment the banks and financial institutions that created loans for folks who should have remained renters and then sold those loans as investments to pensions and countries would have been cleansed by capitalism's ecosystem. But that isn't what happened.

In a very anti-capitalistic move the government decided that stupidity and criminal activity should be rewarded. I'd say they took our money, but it is worse, we didn't have that much money. So they borrowed the money in our name. The loan has a variable rate. They borrowed so much money that our kids cosigned the loan. In fact, our kid's future kid's signed on the dotted line. That is unequivocally immoral.

They gave that borrowed money to a bunch of morons as a reward for stupidity. Morons who created subprime loans, liar loans, no income no documentation loans and other fraudulent instruments. Morons bundled that trash, got it rated AAA and then sold these turds or weapons of mass destruction that they had the audacity to name complex financial instruments or derivatives to pension funds, countries and other "investors". Then it all blew up. Big surprise.

For blowing up the world's economy this Stupidity Crisis was falsely named an Economic Crisis by CNBS and 535 morons on a hill in DC (Ron Paul and a few other fiscally responsible adults excluded). The idiots who created the mess were rewarded with a 700 billion dollar "bailout". This "bailout" was anything but a bailout and had a price tag of anything but 700 billion. The actual price tag is closer to 11 trillion and puts us on the hook for another 13-17 trillion - not counting interest. Think about that for a second. This stupidity crisis is the equivalent of our Federal Debt which took a generations of politicians over a hundred years to wrack-up.

For anyone who still believes we live in a free country where capitalism reigns please show me one economic textbook which states that failure, and fraud get rewarded with borrowed taxpayer money. For anyone who believes we live in a democracy please show me a textbook that says the government will en-debt you and your kids and their kids to pay for a failed business. How is that democratic?

"Law of Morons": Years ago, while serving on a committee I came to a sad realization. Like gravity, there is the another invisible force which I dubbed "The Law of Morons". Put a group of very intelligent, well meaning people in a room together, put them on a committee or some governmental body that is devoid of guiding principles or merit based decision making and "The Law of Morons" will prevail. The collective IQ will drop to the smallest shoe size in the room. And hope for loafers, because collectively this body won't be able to tie anything together - not even a single shoelace.

Government Creates Problems: Basically our government is comprised of many well meaning intelligent people who for whatever reason, re-election, greed the "Law of Morons", corporate puppet strings (read: lobbyist), self interest, corporatocracy or whatever else, do nothing but create massive problems. Lack of regulation, too much regulation. And without any uncertainty - too much DEBT along with a deficit that will NEVER be paid. They have failed us. Terribly! With debt and a failed capitalistic society our democracy is now at risk. Serious risk.

"A democratic society requires a stable and effectively functioning economy. I trust that we and our successors at the Federal Reserve will be important contributors to that end." ~ Alan Greenspan

Serious irony there unless he was talking about the end of a democratic society. Greenspan was primarily responsible for muzzling Brooksley Born's attempt to regulate derivatives. Our deficit requires that we counterfeit "money" to service our debt payments.

Forget about GDP, it is a bogus measure cooked by the BEA (US Bureau of Economic Analysis) . GDP is so baked that it makes the folks who cooked Enron's books look like saints. Let's focus on what we take in and what we pay out. We take in about 2 trillion in taxes and other revenues. We borrow about 2 trillion of which about 1 trillion must be taken off for debt service, and we spend well over 4 trillion. To deal with the 1.6 trillion ++ shortfall we just print/counterfeit it. This debases the value of every dollar we hold, stealing wealth from every hard working American. It causes the need for more dollars to be injected into the system, which increases the amount of taxes that Americans pay. There are only two crimes listed in our Constitution: Treason and counterfeiting.

Corporatocracy: A government that serves the interest of, and may de facto be run by corporations. Some states have government workers who have powerful unions that influence the government's decisions. California has a massive pension mess, created in large part by government unions and elected officials who have catered to these unions. "Too Big To Fail" is living proof that capitalism is dead. These TBTF institutions that blew up the economy in 2008 with their stupidity crisis, at the very least deserved to fail. They blew it. That is the definition of capitalism. You do well you are rewarded, you screw up you close shop. You commit fraud and you do time.

But with a Corporatocracy you have Hank Paulson - a former Goldman Sachs CEO worth about 700 million dollars who winds up becoming our past Secretary of the Treasury. There is a serious distinction between a civil servant and someone who serves a corporation, especially the last corporation he worked for. His salary was only six figures, but his benefit was that he got to cash out of his stocks and pay no taxes. He gave the morons who blew up the economy 700 billion dollars. He had another former Goldman Sachs employee disperse the funds while the current CEO of Goldman Sachs professed to be "Doing God's work."

In Summary: Our debt and our inability to revive capitalism and cut the waste in government will be our demise. Sadly, the only glimmer of hope I see is that Corporatocracy will destroy itself. I say sadly because it will destroy the average American citizen like some parasite that kills it's host. Capitalism is dead and that is why we are totally screwed."
- http://www.financialsense.com/
Posted by CoyotePrime at 8:52 AM

Email ThisBlogThis!Share to TwitterShare to FacebookShare to Pinterest
Labels: corporatocracy