Neuroscience: "Pheromones: The Smell of Sex?" 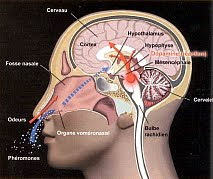 "Pheromones: The Smell of Sex?"
by NuMe
"Whether it’s the first flicker of sexual attraction, or deep in the throes of passion, it’s a good bet that when you’re in the moment, you’re not worrying about the chemistry of desire. We all know that hormones and endorphins play a roll in our love lives, but it wasn’t until recently that I ever gave pheromones much thought. My husband and I were having our usual “date night,” and I’d grabbed a few items to spice things up a bit, including some new, scented massage oil. As our play progressed, I found myself becoming completely uninhibited and able to say or do whatever I felt without worry - something that was totally out of character. Not only that, but I felt that I “looked” very sexy - and that is extremely rare for me. It all translated into an amazing night for both of us.

I kept thinking: What’s going on? What’s different? Because I definitely wanted to be able to repeat the experience. It didn’t even occur to me until the following morning the whole thing might have been thanks to the pheromones in the massage oil. And while I never really believed in bottled aphrodisiacs - except maybe Jack Daniels - I had to admit something out of the ordinary happened. So, I decided to do some research to find out if it was a fluke or the real deal.

Is She Really Going Out With Him? If you ask most people what attracts them to one person instead of another, they will most likely respond with the usual answers like: personality, looks, similar likes and dislikes. But aren’t you sometimes curious when you see an unlikely couple, why they’re together? What about when you meet someone who isn’t so sexy to look at, and yet you’d bed them in a hot minute? Or what about the opposite: You meet someone who might have stepped out of the pages of a magazine - and they even have a brain - yet you feel not the slightest sexual spark.

James V. Kohl, author of the award-winning treatise: “The Mind’s Eyes: Human Pheromones, Neuroscience, and Male Sexual Preferences and co-author of “Human Pheromones: Integrating Neuroendocrinology and Ethology,” who is considered by many to be the foremost internationally known authority on human pheromones, says, “The chemical signals we send have a direct effect on hormone levels in other people.” But what about mind, the will and emotions? We are humans after all, not just animals. Says Kohl, “Most actions are based on unconscious effects, animal behavior, where something causes a hormone to change without thought, when we start to think about it we have the option of behaving like an animal or thinking it through.” In other words, while something about another person may turn our heads and pique our interests by way of pheromones, these chemicals are not necessarily effective enough, in and of themselves, to be responsible for a continued relationship with them.

There are some scientists who discount the theory that humans even have pheromones, let alone whether these chemicals play a roll in sexual desire. But there is a lot of evidence that we do. In a 1998 study by researchers at the University of Chicago, scientists were able to regulate the menstrual cycles of a large group of women. Since the length of women’s menstrual cycles and the release of their eggs are both regulated by pheromones, it was the first real proof that we do produce and react to them.

Other studies claim that women smell sexier to men during ovulation, or even that the nose “knows” who is the right partner for us. Oh, and male armpits can actually turn some women on thanks to substance in a male sweat (androstadienone) that subconsciously attracts females. Who knew? There’s also data to suggest that heterosexual men and women respond to the pheromones of the opposite sex, while homosexual men and women respond to the pheromones of the same sex. And then there are pheromones that are unisex that can be used to make you seem more attractive and approachable to others regardless of gender or orientation.

Lust in a Bottle: We’ve all seen the plethora of products making claims such as: “Attract Men Instantly!” and “Be a Babe Magnet!” But do they really work? Can you really bottle pheromones? While the topic is still being debated, there’s plenty of pheromone-postive propaganda, all backed by “scientific studies.” Though the data “overfloweth,” you might come away confused by the variety of results people may - or may not achieve.

I asked Kohl why these products seem to work for some and not others. “While we can predict what will probably work for most people,” he explains, “we cannot predict who a specific individual will like, because sexual preferences vary,” adding that some people might feel a product doesn’t work because they wore it and didn’t “get lucky.” “Simply put,” he concedes “pheromones don’t create desire, they merely enhance it. If you’re not desirable to start with, because your personality is disagreeable, you’re not going to get lucky by using pheromones.”

So how do all the perfumes and colognes that don’t contain pheromones play into this equation? Bottled fragrances are a multibillion-dollar industry. Are we wasting our hard-earned money trying to smell good for the opposite sex when we have all these natural pheromones to do it for us? And what about the Axe phenomenon? Is that all just advertising hype? Actually, no. It’s been shown that a person who wears fragrances feels better about him or herself, and more confident, thus making that individual more attractive. Also, it seems the frangrances actually interact with and enhance our natural scents and pheromones.

After sniffing around this topic ’til I was blue in the face, I finally concluded that while pheromone research has a way to go, it’s pretty clear that there’s something to the science. I can attest to the fact that what happened the night we used a product containing pheromones - whether it was “all in my head” or in my olfactory receptors - was unlike anything I’d experienced before. So the next time you have a nose-jerk reaction because the guy that just walked past you smelled Oh so good, it could be the cologne he’s wearing - or it might just be his pheromones that are making you want to follow him home."
- http://www.alternet.org/sex/147940/
Posted by CoyotePrime at 2:18 PM