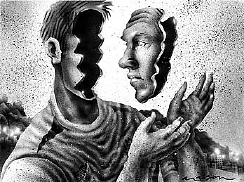 "Know Thyself"
by Chet Raymo
"The ancient Greek aphorism, attributed to Socrates and others. Good advice, I'm sure. If only we knew what it means. Is it the same as the "examination of conscience" we were asked to perform as young Catholics? "Bless me, Father, for I have sinned." Well, yes, it is good to ask ourselves if we have lived up to our highest moral aspirations. But surely "Know thyself" means more than that.

Does it mean to be aware of our self-awareness? That is to say, not to act impulsively, but reflectively. Thoreau's "I went to the woods because I wished to live deliberately, to front only the essential facts of life, and see if I could not learn what it had to teach, and not, when I came to die, discover that I had not lived."

Or perhaps it means to apply the method of scientia to the problem of consciousness, treat the mind like a fish that can be dissected at the lab bench, watch the brain flickering on the display of a scanning machine as the subject is stimulated with love, sex, fear, music, pain. Neuroscience. Daniel Dennet's book audaciously titled "Consciousness Explained." There is a line from a poem by Jane Hirshfield, in which she questions herself: "A knife cannot cut itself open/ yet you ask me both to be you and to know you."

Is it hopeless then? Is there an essential absurdity in a thing knowing itself? Does knowing necessarily imply a knower more complex than the thing known? Is it possible that we might fully understand, say, the neurology of the sea slug Aplysia, that favorite subject of experimental neurobiologists with only 20,000 central nerve cells, big nerve cells, ten times bigger than human neurons, but not the workings of the human brain, with its 100 billion nerve cells, each one connected to thousands of others?

Hirshfield's poem is titled "Instant Glimpsable Only For An Instant." Perhaps that is the best we can do. To know ourselves in those fleeting moments of recognition than come now and then, often unbidden, sometimes as the result of a chance encounter with beauty or with ugliness, sometimes bidden out of the silence and solitude of meditation - a flash upon one's inward eye that is, perhaps, all the ancients were asking for when they asked us to "know ourselves."
- http://blog.sciencemusings.com/2010/09/know-thyself.html
Posted by CoyotePrime at 3:31 PM