"Did A Steering Error Sink the Titanic?" 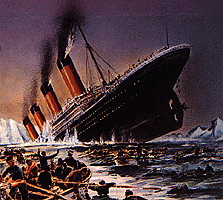 "Did A Steering Error Sink the Titanic?"
by Rossella Lorenzi
"A steering error, followed by the deliberate decision to continue sailing, sank the Titanic in the icy waters of the North Atlantic, according to the granddaughter of the ocean liner's second officer. Louise Patten, a British novelist and granddaughter of Charles Lightoller, the most senior Titanic officer to have survived the disaster, claims in her new book, "Good as Gold," that the truth behind the sinking of the liner was intentionally buried.

The full story of that dramatic April night in 1912 was told by Lightoller, who went on to become a British war hero in World War II, only to his wife Sylvia. It has remained a family secret for almost 100 years. “My mother insisted that everything remained strictly inside the family. A hero’s reputation was at stake,” Lady Patten, who is the wife of former Conservative Education minister Lord John Patten, told London’s Daily Telegraph. “Nearly 40 years later, with Granny and my mother long dead, I was plotting my second novel, and it struck me that I was the last person alive to know what really happened on the night Titanic sank,” Patten said.

The world's biggest passenger liner when it left Southampton, England, for New York on its maiden voyage on April 10, 1912, the RMS "unsinkable" Titanic struck an iceberg in the North Atlantic four days later, on April 14. It sank within hours with the loss of more than 1,500 lives. According to Patten, it all happened because of confusion about steering orders. When the Titanic sailed, shipping communications were in transition from sail to steam. Two different steering commands were in operation: Tiller Orders for sailing ships and Rudder Orders for steam. Tiller and Rudder orders were the complete opposite of one another: the command to turn "hard a-starboard," for example, meant to turn the wheel right under one system and left under the other.
As First Officer William Murdoch spotted the iceberg, his "hard a-starboard" order was wrongly interpreted by the Quartermaster Robert Hitchins, who was trained under the more archaic Tiller orders. He turned the ship right instead of left, exactly toward the iceberg. “The steersman panicked and the real reason why Titanic hit the iceberg, which has never come to light before, is because he turned the wheel the wrong way," said Patten.
Her grandfather Lightoller was not on watch at the time of the collision, but heard of the fatal mistake during the dramatic officer meeting which took place in the First Officer’s cabin immediately after the collision. During that meeting, Bruce Ismay, chairman of Titanic's owner, the White Star Line, persuaded the captain, Edward Smith, to keep sailing. “Ismay insisted on keeping going, no doubt fearful of losing his investment and damaging his company’s reputation,” said Patten. Continued sailing caused water to enter through the damaged hull, accelerating the sinking. "The nearest ship was four hours away. Had she remained at 'Stop,' it’s probable that Titanic would have floated until help arrived," Patten noted.
The only survivor who knew what had really happened, Lightoller covered up the blunder in two official inquiries. According to Patten, he was worried that the truth would bankrupt the White Star Line's owners, thus making his colleagues jobless. "The inquiry had to be a whitewash. The only person he told the full story to was his beloved wife, Sylvia, my grandmother,” Patten said.
Claims around the Rudder/Tiller orders are not new to Titanic experts. "In the Titanic world, it's always been one of those things that's referred to,” Michael McCaughan, a maritime specialist and Titanic expert, told London’s Guardian. Meanwhile, Sally Neillson, the great granddaughter of Robert Hichins, who is also working on a Titanic book - “Hard A-Starboard” due to be published before the centenary anniversary of 2012 - totally rejected the claim. "Hichins had 10 years experience, seven of those as a quartermaster. He sailed the Titanic for four days before the accident, during which he did shifts of four hours on, four hours off. He would have steered the vessel during these times, so been familiar with the systems,” Neillson told UK TV Channel 4."
- http://news.discovery.com/
Posted by CoyotePrime at 6:22 PM

Email ThisBlogThis!Share to TwitterShare to FacebookShare to Pinterest
Labels: titanic