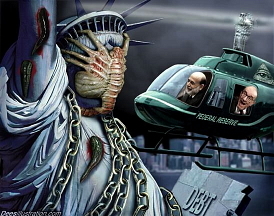 That’s how the American government’s massive deficit is sucking up all the available funds. Why bother lending to the private sector, when the Federal government is paying good interest on the Treasury bonds, and the Fed is lending an endless supply of money for free? This is why private-sector businesses are not getting any loans, no matter how long the Fed keeps interest rates at rock-bottom levels – the Federal government is hoovering up all that money, leaving the private sector with nothing, not even lint. Ben Bernanke and the Lollipop Gang at the Fed do not seem to understand the disincentive they have created – in fact, they just keep on adding even more liquidity: Backstop Benny has announced that QE2 is on the way – that is, further “expansion of the balance sheet,” so as to create more money to give out to more banks – so they can buy more Treasuries from the Federal government.
Other banks which are not TBTF are getting squeezed – everyone acknowledges that the banking industry is really hurting. But the TBTF banks are racking up monster profits, with monster bonuses. That’s because they’re monsters – or more precisely, they are zombies: The American Zombie banks. Now this is all good and fine, but is there a simple way to verify that this stealth monetization is indeed what is going on? Yes – look at the markets: Over the past few months, we have seen two things occurring simultaneously: Treasury bond prices are rising (and therefore their yields are declining), and the dollar has been falling against all commodities and all other major currencies.
This is a contradiction. This cannot be happening simultaneously for any sustained length of time – unless there is some exterior factor making this contradictory situation happen. It is a contradiction because, if over a sustained period of time the dollar is losing value against commodities and other major currencies, then it would not make sense for investors to be putting more money into Treasuries and bidding up their prices. Not when their yields are at such absurdly low levels. Stealth monetization: That’s what’s bidding up Treasuries, even as the markets are losing faith in the dollar.
Poor Dakota Fanning: She’s in the pedophile’s sights – and she has no idea what’s about to happen. But we do."
- http://www.marketoracle.co.uk/Article22959.html
Gonzalo Lira (Dartmouth '95) is a writer, filmmaker, venture capitalist and economic commentator. He has lived throughout the United States and Latin America, and currently resides in Santiago, Chile. Visit his blog. http://gonzalolira.blogspot.com/
Posted by CoyotePrime at 12:35 AM