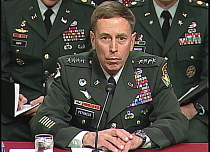 "I don't think you win this war. I think you keep fighting...
This is the kind of fight we're in for the rest of our lives and probably our kids' lives."
- General David Petraeus, quoted in "Obama’s Wars," by Bob Woodward.
•••
Gen. Petraeus' Counter-Insurgency Manual
"According to the US Army counter-insurgency manual re-written by General David Petraeus, a ratio of one soldier to 40 or 50 inhabitants (20 to 25 per 1000) is required to defeat an insurgency. The population of Afghanistan is now about 33,609,937 (July 2009 est.)*, meaning that at least 672,181 soldiers would be necessary for success. After Obama's "surge," NATO deploys approximately 130,000 soldiers in Afghanistan. So... we're about 542,180 soldiers short of the number our own commander claims are necessary to "win." We cannot win. We will inevitably lose.

And you don't have to take my word for it. Just ask General David Howell Petraeus, who, before assuming command of the Afghan theater of war at Presidential request, was responsible for US military operations in 20 countries from Egypt to Pakistan, including Operations "Iraqi Freedom" and "Enduring Freedom," the ridiculously inappropriate name for our brutal occupation of Afghanistan. We cannot win. We will inevitably lose. Ain't that a hoot!?"
- Rutabaga Ridgepole, http://tpmcafe.talkingpointsmemo.com/
* http://wiki.answers.com/Q/What_is_the_population_of_Afghanistan_in_2009
•••
A comment: Well folks, this seems really easy to understand. Our latter day Caeser's own counter-insurgency manual reveals we CANNOT win this war, yet he states we may be there "for the rest of our lives and probably our kids' lives." WHY? At what cost in lives lost? Another trillion dollars we don't have? If this is not by definition insanity, then you tell me what is... - CP
Posted by CoyotePrime at 7:41 AM