"How To Survive a Dog Attack" 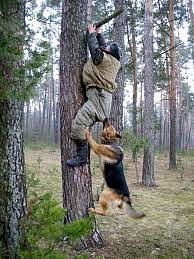 "How To Survive a Dog Attack"
by wired.com
"Most of us know our dogs as fuzzy love bandits who consider our feet bony pillows instead of chew toys. But for runners, mailmen and hikers, dogs can be dangerous - especially since canines are generally faster and stronger than us, and they have bigger teeth than we do. It's not enough to have an embarrassed owner declare, "Pookie would never do that!" especially if Pookie happens to be gnawing on your leg at the time. If you have a tendency to come across aggressive dogs, keep these helpful tips in mind.

Avoid the pooch. If you see an unleashed dog ahead of you, walk across the street. If it's not paying attention to you, whistle, sing or speak to it in order to make your presence known as you approach. As irritable as a dog might be to find you on his territory, he will be doubly more irritable if you've surprised him.
Be confident, but not threatening. Like chimps, dogs consider bared teeth and direct eye contact to be confrontational. If you're approached by a dog showing signs of aggression - growling, hackles, barking - stop moving. Running away will only arouse the dog's instinct and make him chase you. If you have an umbrella or a stick, hold it out in front of you to make yourself appear bigger. Stand up straight, keep your mouth closed, and your gaze level, as looking down can be construed as a sign of weakness. Don't hold your hand out to be sniffed and don't turn your back to the dog. If he loses interest in you at this point, back away slowly before turning around.
Try the sit, stop or stay commands. If this works, it may give you some time to call the attention of its owner. Police dogs are taught their commands in German, and some obedience schools use German commands. So try yelling Nein! or Platz! at the angered dog. Here's a list of other German commands.
Jam something in its mouth. A good tip for runners who frequently come across aggressive dogs is to run with a drum stick - not a turkey leg, but a stick you use to play the drums. A rap across the nose often brings a lot of dogs to their senses, and if not, shoving the stick into the dog's mouth gives it something to bite on besides you. A jacket, sweater, bag or water bottle will do as well. If your hands are empty, offer it an arm - hopefully wrapped in some protection. Don't let the dog drag you to the ground, where you will be infinitely more vulnerable. And don't struggle to get your arm free, you will just hurt yourself even more.
Go on the offensive. A military man in an Eric Ambler spy novel once said something like, "all you need is to be physically fit and have a good pair of shoes." The very nature of a dog attack exposes it to a boot in the throat or jaw, followed by repeated kicks until it stops struggling. Alternately, if the dog has your arm in its mouth the eyes are vulnerable target. To stop a dog attack on other dogs, an owner will usually grab the back legs and flip the dog like they're shaking out a blanket, which loosens the dog's jaws and can also have the unfortunate effect of snapping its neck. This could work for you as well, but be careful to not let the dog get you on the ground. I have heard that grabbing the dog's bottom jaw with your hand gets control of the head, and will not allow him to bite. Alternatively, if you can grab the dogs front legs and pull them apart, it collapses the rib cage, and the dog cannot breathe.
Go on the Defensive. This will not work on breeds with short snouts and is more effective the stronger and taller you are but can work for everybody. Martial arts movie viewers will have seen the hero defend against a blade by catching the blade between the palms of their hands. This technique can be adapted for dog attack. Dog's mouths are built to close forcefully but are not as strong when opening. Clamping the dog's mouth shut with one hand on each of the upper and lower jaws serves to keep him from biting and control the dog's head.
Move to open space if possible and circle so the dog has to approach you from the front. Keep your hands spread wide and wait for him to come into range. Focus on his nose and slam his mouth shut. Bringing him closer and bending your arms increases leverage. Once under control resist the urge to hammer-throw Rover across the road. You are on the clock as your hands will tire and you will eventually have to release him. If he continues to struggle burn off some of that major shot of adrenalin that's making you stronger than you normally are by lifting man's best friend's feet right off the ground. This kind of domination usually provokes submissive behavior. Also, if possible, flip the dog on it's back. Hold the dogs muzzle closed with one hand, and hold the dogs neck with the other. Start talking to it with a loud, gruff, growley voice. This is putting the dog in a very submissive posture.

Minimize the damage. If it's at all possible, try to identify the animal - after you've gotten away, of course. Determining whether a dog is a pet or is wild could also determine whether or not you need rabies shots, a pretty painful process that needs to take place within 48 hours of the bite. Visiting a doctor immediately afterwards will also help determine if you need antibiotics or a tetanus shot, as dog bites can become infected pretty easily.
Know the law. Many states have laws requiring that a dog who has attacked a human must be put down or else compulsorily tested for rabies. Contact 911 or animal control to have the animal trapped or subdued. There's a possibility that you may need compensation for your medical bills, particularly if you've required stitches or other emergency room procedures. Be sure to take down their information, if possible."
- http://howto.wired.com/wiki/Survive_a_Dog_Attack?
Posted by CoyotePrime at 7:35 PM