"The Wandering Male versus Female Brain"
by NeuroKüz
"There has certainly been a good amount of recent controversy over the science of sex differences and the brain. Pop-science books such as "The Male Brain" and "The Female Brain" that emphasize (and probably exaggerate) sex differences have drawn major criticism. A couple of new books expose flaws in the stereotypical 'men think about sex every 5 seconds because they are programmed to' theory and related ideologies. 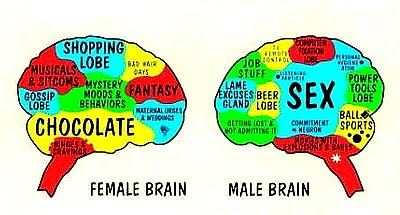 The above figure summarizes the well-accepted theory of male versus female brain function. A new groundbreaking study of brain activity in males and females at rest has brought the theory into question. It turns out that, when males and females are scanned by fMRI while told to close their eyes and not think about anything in particular, their brain activations are virtually the same.
Researchers examined the brain activity of 26 females and 23 males who rested in a scanner and daydreamed. Three different well-characterized neural networks were analyzed for differences between males and females: the executive control network, the salience network, and the default mode network. The first two networks include several brain regions that have been associated with cognitive task performance in many previous studies. When subjects are at rest, these cognitive networks are deactivated but the resulting signal provides insight to their intrinsic behaviour. The researchers chose to look at these 2 cognitive networks because of mixed findings from previous work that indicated possible differences between associated male and female cognitive performance and brain activity. However, when the signals among different regions within these networks were compared (in a functional connectivity analysis), no differences between males and females were found.

The third network that was analyzed (default mode network) is a network that is activated when subjects are at rest. Although the function of the default mode network is controversial, activity in the brain regions of the network are thought to be associated with daydreaming, thinking about the past and future, and gauging others' perspectives. Or if you accept the classic theory of males versus female brain function, this is the network that represents thoughts of sex and lame excuses for men, and thoughts of shopping and musical sitcoms for women. The problem is: no differences between males and females in functional connectivity of the default mode network were found either.

It should be noted that the findings did not match the hypothesis of the researchers, who thought that differences between the sexes would be found because that would support the findings of previous reports. However, this study had more subjects than most previous studies on male versus female brain differences, so the statistical power is higher. Furthermore, this is the first study to directly investigate male-female differences in resting brains, so the findings do not necessarily contradict other studies that involved concentration or attention. The researchers go as far as to suggest that resting state fMRI studies do not need to be controlled for sex because males and females have the same brain activity anyway.

Now that this blog post is done I feel my beer lobe lighting up and telling me to grab a cold one. Wait a second... is that possible?"
- http://neurokuz.blogspot.com/
Posted by CoyotePrime at 2:47 PM