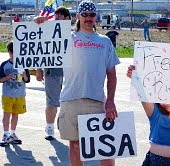 "Stupidity, R.A.T.S., and Sociopaths"
by Jon Faulkner
"How did it happen? That Americans came to accept their failed state? If only it could be explained as some temporary aberration. But far too many Americans embrace those who steal their freedom, their dignity and their kid's futures. The thieves are very good at concealing their theft. The Republican Right Wing has adroitly maneuvered naïve, gullible and stupid Americans into hating their government while the opposition party, the Democrats, have succumbed to "if you can't beat 'em, join 'em."

Elected Democrats claim they are mystified over why their progressive base is abandoning them. It's not complicated. Progressives have reached the saturation point and can't absorb any more betrayals. Just as Charlie Brown did when Lucy kept snatching the football away. Progressives feel just as foolish as Charlie always did when once again he found himself duped by Lucy's deceit.

The Republicans learned long ago that convincing the ignorant of their victimhood is very good strategy. Stir up feelings of resentment and fear then tell them who to hate. An ignorant fool in Florida wants to burn Qurans. Reagan's "Welfare Queens" are taking food out your kid's mouths. Mexicans are stealing your jobs. Point at the Liberal "baby killing" Democrats who permit such things and are destroying the moral fabric of the nation. The Republicans use their armies of morons like a maestro conducting an orchestra.

Human stupidity, like the tide, is impossible to contain. For over 30 years Republican Administrations have consistently worked to destroy the nation's central government. They have succeeded by attacking its financial base, taxes, and framing issues through their media machine. Reagan got rid of the Fairness Doctrine making it possible for Limbaugh, Beck and Fox News to propagandize against the left. Right Wing media predictably howl, every election cycle, about the fiscally irresponsible Democrats. Reagan's two terms saw the national debt rise by 89%. Clinton, in 8 years, is credited with creating almost 28 million jobs and leaving Bush a surplus. Bush began two wars on credit while he cut taxes for the rich, finally leaving a $10 trillion debt and a ruined economy in his wake.

Promising tax cuts wins elections. But at what price? 20 years ago the U.S. ranked first in educating its kids. Today it's tied with Belgium in seventh place. 20 years ago the U.S. ranked 29 in infant mortality. Today it ranks 42. A crumbling infrastructure and declines in services in all walks of American life is taking its toll. Well over half of all Americans believe their nation is in decline while the Tea Bag anti-tax movement gains strength. The regressive right is eating the nation from the inside out while paralyzed Democrats watch like rubber necking ghouls at a car wreck. Two certifiable morons, Sarah Palin and Joe the Plumber, often headline Tea Bag antics. "The only way to understand the mathematical concept of infinity is to contemplate the extent of human stupidity."- Voltaire

Here is stupidity. The U.S. spends enormous amounts of money and energy on war and weapons of war while its citizens lack basic health care. If survival is a function of intelligence the argument could be made that cockroaches are smarter than humans. Roughly half of Americans do not take global warming seriously. Numerous scientific studies taken over many years predict extremely dire circumstances if fossil fuel emissions are not brought under control. An intelligent race, interested in its survival, would not ignore such predictions from their brightest people. Millions take Limbaugh's scornful dismissal of global warming as truth while belittling Nobel Prize winning scientists as tree huggers and bunny lovers. This is stupidity. "Should the human race not be extinguished by a nuclear war it will degenerate into a flock of stupid, dumb creatures under the tyranny of dictators who rule them with the help of machines and electronic computers. This is no prophecy, just a nightmare." - Max Born ("Bulletin of the Atomic Scientists," November 1965)

The nation has reached the tipping point. Obama's chances of getting re-elected are nil and it is abundantly obvious that the U.S, after another 8 years of governance by sociopath, will fade into histories' dust heap of once great nations. Roughly half the electorate are again anxious for more abuse from the Republicans, and abuse they will get. Give the Republicans 8 more years and seniors will be lining up for soup when their Social Security is given away to Wall Street's bankers. Medicare? Medicaid? Both, according to Republicans, are socialized medicine that only a commie could approve of. "Force crap or stupidity into their minds so they'll pay you without requiring that you produce anything of value." - Frederick Mann

Roberts, Alito, Thomas, and Scalia, or more appropriately, R.A.T.S, should be tarred and feathered and run out of town on a rail. They are a disgrace to every American who has ever defended or loved freedom. Unfortunately not enough Americans pay attention to the damage the R.A.T.S. inflict on the nation. AT&T gave the legal maximum to Bush/Cheney, and is giving $1 million to the Bush Presidential Library. Thanks to R.A.T.S. AT&T, and any other corporation, can now buy outright any Congressman who is willing to jump through their hoop.

Tea bags and other truly stupid Americans will continue supporting a corporate oligarchy whose greatest trick, like the Devil's, lies in making people believe it doesn't exist, and dictates domestic and foreign policy according to profit motive. Nice trick. Especially when so many Americans eagerly cheer the forces that rob them of their money, and what little is left of their dignity and freedom. Their hatred of government keeps them distracted as corporations, now completely enabled by a traitorous Supreme Court, steals their last nickel, their freedom and their children's futures. "Only two things are infinite, the universe and human stupidity, and I'm not sure about the universe." - Albert Einstein

It is left to progressives to field a presidential candidate. The DNC will only produce another Republican candidate to run against whichever right wing sociopath the RNC selects. Progressives must take their grass roots efforts to the Independent, or the "Tired of It And Ain't Gonna Take It No More Party." Progressives don't have Limbaugh, Beck and Fox. They have something better. Hollywood is full of wealthy, progressive artists who could easily put the Republican Media Machine to shame. Creative people of all stripes could beat the Republicans at their own game, after all, progressives are considerably brighter people than their right wing counterparts, even though it must be said they worked very hard to get a fraud elected in 2008.

Satire, comedy with Republicans as the punch line, a movie exploring the final result of right wing political dominance - the possibilities are virtually endless. The classic, "It's a Wonderful Life," was the last movie to offer Americans a serious look into a future controlled by the Henry Potters of the world. Bill Clinton and Obama were presented to progressives as take it or leave it choices. It's time progressives left it."
- http://www.opednews.com/
•••
Jon Faulkner is a licensed Master Mariner. He has long considered the
conservative Republican mindset a form of mental illness. He lives in northern Maine.
Posted by CoyotePrime at 7:35 PM