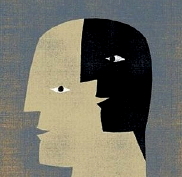 "'Inner Voice' Plays Role in Self Control"
by PhysOrg.com

"New research out of the University of Toronto Scarborough - published in this month's edition of "Acta Psychologica" - shows that using your inner voice plays an important role in controlling impulsive behaviour. "We give ourselves messages all the time with the intent of controlling ourselves - whether that's telling ourselves to keep running when we're tired, to stop eating even though we want one more slice of cake, or to refrain from blowing up on someone in an argument," says Alexa Tullett, PhD Candidate and lead author on the study. "We wanted to find out whether talking to ourselves in this 'inner voice' actually helps."
Tullett and Associate Psychology Professor Michael Inzlicht, both at UTSC, performed a series of self control tests on participants. In one example, participants performed a test on a computer. If they saw a particular symbol appear on the screen, they were told to press a button. If they saw a different symbol, they were told to refrain from pushing the button. The test measures self control because there are more "press" than "don't press" trials, making pressing the button an impulsive response.
The team then included measures to block participants from using their "inner voice" while performing the test, to see if it had an impact on their ability to perform. In order to block their "inner voice," participants were told to repeat one word over and over as they performed the test. This prevented them from talking to themselves while doing the test. "Through a series of tests, we found that people acted more impulsively when they couldn't use their inner voice or talk themselves through the tasks," says Inzlicht. "Without being able to verbalize messages to themselves, they were not able to exercise the same amount of self control as when they could talk themselves through the process."
"It's always been known that people have internal dialogues with themselves, but until now, we've never known what an important function they serve," says Tullett. "This study shows that talking to ourselves in this 'inner voice' actually helps us exercise self control and prevents us from making impulsive decisions."
- http://www.physorg.com/news204285912.html
Posted by CoyotePrime at 3:04 PM