"The Super-Rich Get Richer, and Everyone Else Is Going Down the Drain" 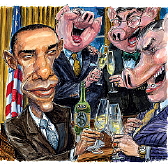 "The Super-Rich Get Richer,
and Everyone Else Is Going Down the Drain"
By Robert B. Reich
"The super-rich got even wealthier this year, and yet most of them are paying even fewer taxes to support the eduction, job training, and job creation of the rest of us. According to Forbes magazine’s annual survey, just released, the combined net worth of the 400 richest Americans climbed 8% this year, to $1.37 trillion. Wealth rose for 217 members of the list, while 85 saw a decline. For example, Charles and David Koch, the energy magnates who are pouring vast sums of money into Republican coffers and sponsoring tea partiers all over America, each gained $5.5 billion of wealth over the past year. Each is now worth $21.5 billion.
Wall Street continued to dominate the list; 109 of the richest 400 are in finance or investments. From another survey we learn that the 25 top hedge-fund managers got an average of $1 billion each, but paid an average of 17 percent in taxes (because so much of their income is considered capital gains, taxed at 15 percent thanks to the Bush tax cuts). The rest of America got poorer, of course. The number in poverty rose to a post-war high. The median wage continues to deteriorate. And some 20 million Americans don’t have work.
Only twice before in American history has so much been held by so few, and the gap between them and the great majority been a chasm — the late 1920s, and the era of the robber barons in the 1880s.  And yet the Bush tax cuts of 2001 and 2003, which conferred almost all their benefits on the rich, continue. Democrats have decided to delay voting on whether to extend them for the top 2 percent of Americans or for the bottom 98 percent until after the mid-term elections.  Democrats have thereby given up a defining issue that could have enabled them to show the big story of the last three decades — the accumulation of almost all the gain from economic growth at the top — and to make a start at reversing it. When will they ever learn?"
- http://www.alternet.org/economy/148294/
•••
Robert Reich is professor of public policy at the Richard and Rhoda Goldman School of Public Policy at the University of California, Berkeley. He was secretary of labor in the Clinton administration.
Posted by CoyotePrime at 6:10 AM