"That 'Official' Poverty Rate? It's Much Worse than You Think" 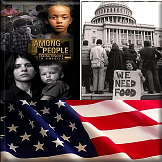 As American philosopher John Dewey once said, “There is no such thing as the liberty or effective power of an individual, group, or class, except in relation to the liberties, the effective powers, of other individuals, groups or classes.” The United States now has the highest inequality of wealth in our nation’s history. Tens of millions of Americans are wondering how they are going to pay their bills, while the people who caused this crisis are rolling around in $13 trillion. The robber barons have been displaced as America’s most despotic and depraved ruling class."
- http://www.alternet.org/economy/148255/
"You say you want a revolution, well, you know..."- the Beatles
Posted by CoyotePrime at 6:33 AM