Archaeology: “Neolithic Europe and the Middle East Were Equally Advanced”

“Neolithic Europe and the Middle East Were Equally Advanced”
by articlesafari
“The existence of an original civilization on the continent of Europe which predates the civilizations in the Middle East, has to a large degree been ignored by traditional history writers, particularly those who wrote during the dominant Christian era in Europe. This was largely because of a biblical Judeo-Christian bias which held that all civilization started exclusively in the Near East (the biblical Old Testament deals exclusively with events in the Middle East). This is not an accurate reflection of the facts, as in many parts of northern and western Europe relatively advanced societies were in existence either before or simultaneously with the Mesopotamian or Egyptian civilizations. 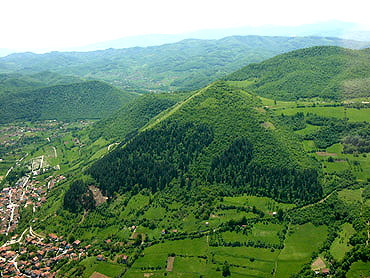 Bosnian pyramid.
While it is most certainly true that the great cities and states in the near and Middle East were towering achievements, it is incorrect to regard them as the only flowering of civilization in the world at that time. There are many huge buildings – called megaliths – and early Neolithic settlements, artifacts and burial sites and even writing, which show that the inhabitants of Europe were advanced in the evolution of their societies and culture.
Cereal grain farms were (re)established in central Europe by 8000 BC (almost simultaneous with the Mesopotamian “Fertile Crescent” River Valley crop cultivation) with some of the best preserved farming settlements in France and Britain have been positively dated as being in existence prior to 4000 BC. Significantly, copper working had been established in the Balkans by the year 5000 BC – some 2000 years before the first civilization in the Mesopotamian River Valley.
In Neolithic Europe, where wood was abundant, rectangular timber houses were constructed. Some had two rooms and even gabled roofs. Remains found in Switzerland dating from around 5000 BC show that even on soft, swampy ground, the builders were able to erect houses by first laying down wooden foundations or on piles going deep into the ground. By the year 5000 BC, Neolithic settlements had taken on the form of established villages, towns and in a few cases, even cities, scattered throughout Europe, western and southern Russia.
These early Neolithic farmers cultivated cereals, and kept domesticated animals such as pigs, cattle and dogs. Farms were established across the European continent, with some of the best preserved sites being found in Ireland. Their tools and hunting weapons were mostly made of flint, and their houses of timber. Clothes were made of leather, and there is also evidence of weaving. Other small implements were made of antler and bone, and they have left many examples of fairly sophisticated pottery. 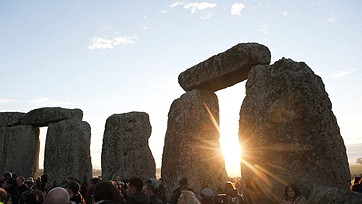 Stonehenge
In many parts of Europe, the longest lasting remnants of this era are the megaliths (“large stones”) which may have had some religious or recreational purpose. Massive blocks of stone, and sometimes wood, were moved great distances and erected in chosen areas throughout Europe, from Britain right across the continent, some even as far as the Black Sea – in Southern Russia – a stupendous achievement. The most famous of these megalith sites is Stonehenge in Wiltshire, England. The “Lux et Orient” or “All light comes from the East” dogma which Christianity introduced, held that all progress and civilization came from the Middle East. With accurate dating methods and intensified archeological research, it has now been shown that advanced civilizations flourished in Europe, sometimes thousands of years before similar technological advances were made in the Middle East.
The Bosnian Pyramid, Visocica Hill, is the first European pyramid to be discovered and is located in the heart of Bosnia, in the town of Visoko. The pyramid has all the elements: four perfectly shaped slopes pointing toward the cardinal points, a flat top and an entrance complex. Because of its similarities to the Pyramid of the Sun in Teotihuacan, Mexico, it has been named the “Bosnian Pyramid of the Sun”. There are also a four more ancient structures on the site, the Bosnian Pyramid of the Moon, Bosnian Pyramid of the Dragon, Bosnian Pyramid of the Love and Temple of the Earth, with a paved entrance plateau and discovered underground tunnels.”
- http://www.articlesafari.com/2010/10/bosnian-pyramids/
Posted by CoyotePrime at 10:46 PM