"Band-Aid Solutions"
By Puru Saxena
"Let’s face it, governments always try to ‘kick the can down the road’. Rather than deal with economic issues in the here and now, they prefer to postpone the pain. Unfortunately, in their attempt to avoid painful economic recessions, the policymakers sacrifice the purchasing power of their currencies and they end up creating even bigger troubles for the future.

Look. The ‘Great Recession’ in the developed world was brought about by excessive debt and consumption. In the boom years, millions of Americans borrowed copious amounts of money to buy real-estate; they used their homes as a source of funding (home equity withdrawals) and spent way beyond their means. In those heady days, everyone was convinced that real-estate prices could not decline on a country wide basis. Unsurprisingly, the bankers gladly supported this misconception by providing cheap fuel to the raging speculative fire. The end result was that unworthy debtors were able to purchase several properties and real-estate prices appreciated considerably.

Unfortunately, when interest-rates went up and credit became scarce, the house of cards collapsed. When boom turned to bust, millions of American homeowners were left with negative equity (see chart below) and the entire banking system came to its knees. When that happened, the American policymakers embarked on a fear-mongering campaign and they misled the public into believing that it was essential to save the banks. During the depth of the financial crisis, we were repeatedly told that the ‘too big to fail’ banks had to be saved, or else the consequences would be dire. 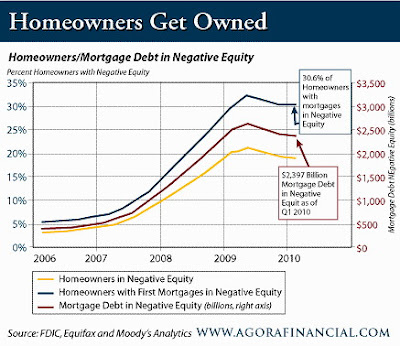 After the establishment succeeded in its scare tactics, it unleashed its ‘stimulus’ and used tax payers’ money to bail out the insolvent financial institutions. In the name of national interest, the Federal Reserve created trillions of dollars out of thin air and it purchased toxic mortgage-backed-securities from the commercial banks. Furthermore, instead of marking down the value of these securities, the American central bank bought the dubious assets at face value! Thus, the American taxpayers bailed out the banks and the risk was transferred from the private-sector to the state.

In addition to nationalizing the bank’s losses, the Federal Reserve dropped the short term interest rate to near-zero and it started buying US Treasury securities. Supposedly, these Band-Aid solutions were necessary to prevent an economic depression and somehow they would revive the world’s largest economy. By dropping the Fed Funds Rate to almost zero, the American central bank hoped to achieve the following benefits:

a. Reduce the borrowing cost of the banks (so they paid next to nothing for deposits)
b. Stimulate private-sector credit growth

In hindsight, the Federal Reserve succeeded in lowering the banks’ borrowing cost but it failed in reviving private-sector credit growth. After all, American households were already leveraged to the hilt and they refused to go even deeper in debt.

In our view, these drastic policy measures were unnecessary and they failed to get to the root of the problem – too much debt. Instead of nationalising the banks’ losses by using tax payers’ money, the American government should have restructured debt in an orderly manner. Insolvent institutions should have been allowed to fail, bondholders should have received a hair cut on their bad loans, and the total outstanding debt should have been reduced. If anything, in order to help the masses, the American establishment should have guaranteed all the bank deposits and taken steps to assist the distressed homeowners. Instead, the American policymakers focused on helping the banks, and in the process, they increased the public’s debt burden! Furthermore, by transferring private sector risk on to the public’s balance-sheet, the American establishment has seriously undermined the quality of the nation’s balance-sheet.

It is noteworthy that over the past decade, America’s federal debt has more than doubled! Today, it stands at US$13.64 trillion and has morphed to 93.5% of GDP! The fact that this surge in debt has produced pathetic economic growth and done very little to bring down unemployment, is proof that Keynesianism does not work. Unfortunately, the American establishment has not learnt from past mistakes and it continues to follow disastrous economic policies. By now, it should be clear to everyone that the first round of quantitative easing failed to stimulate the world’s largest economy. So, if the initial ‘stimulus’ did not work, what are the odds that additional quantitative easing will do the trick?

The truth is that quantitative easing has never worked and this time around, the end result will be no different. In fact, we are prepared to bet our bottom dollar that quantitative easing will fail miserably in reviving economic growth in America. To make matters worse, if the Federal Reserve continues to create money like there is no tomorrow, the stage will be set for an inflationary inferno."
- http://dailyreckoning.com/band-aid-solutions/
Posted by CoyotePrime at 12:19 PM