“It looks like a lunar landscape but this remarkable photograph actually shows our Milky Way and the planet Jupiter in all their glory - viewed from a cave in America's Utah desert. The spiral galaxy, which cannot be seen with the naked eye, was captured by photographer Wally Pacholka using a 35mm camera and 50mm lens on a tripod with a 30-second exposure - long enough to collect the light but not to see the stars moving. 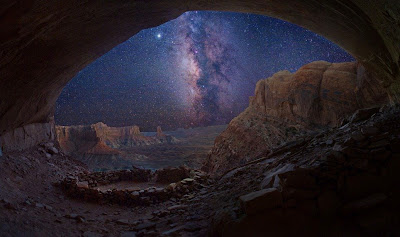 Click image for larger size.
Pacholka, 59, an architect from Long Beach, California, relied on the light of a crescent moon to illuminate the subject and chose the area because of the near-absence of ambient light. He said: 'I had to drive 800 miles each way five times to get the shot right. And I had to hike two miles to the cave and back again at night, getting lost each time I came out.' His photo shows the Milky Way - estimated to be 100,000 light years in diameter and 1,000 light years deep - and Jupiter (to the top left), the biggest planet in the solar system with a diameter 11 times that of Earth's. After Venus, Jupiter is the second-brightest planet despite being about 390 million miles from Earth. The cave, which has been carved out of the desert's red sandstone rock, lies to the south-east of Salt Lake City and is estimated to be 300 million years old. The area is rich with Native American ruins.”
- http://www.dailymail.co.uk/
Posted by CoyotePrime at 6:09 PM